Paul Urbanek feat. Alex MacHacek: The Next Generation of Sound

By Phil DiPietro
October 1, 2001
Sign in to view read count 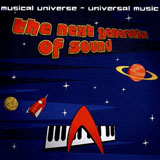 Now comes a band proclaiming themselves as "The Next Generation of Sound," superheroes of creative musicality and musicianship. I mean, how dare they ! We're all out here pummeling search engines, reading jazz reviews, sharing sound files and hitting the clubs trying to figure out where it's really going to come from. Guess what? The next generation of sound, at least in part, is comin' 'atcha from some borough of Austria, precisely the neighborhood in which Paul Urbanek (keyboards) and Alexander MacHacek (guitars) make their humble little homes.

There's a music aficionado from Graz who has been overstating (or so I thought) about these guys on a couple of internet based forums for about a year now. Every post is over the top, you know? Man, one listen to an mp3 somewhere could certainly have saved this project some time! This is hands down the best record (hey I still call 'em records) I've heard this year and it was released in 2000!

Still on the downside of 30, MacHacek is fresh on the scene, one of the very few names that deserves mention in the same rarefied air as Holdsworth and Henderson. These names are invoked way too often, but one listen to last year's astonishing debut, Featuring Ourselves, which was released during the same year as this gem, will prove it. MacHacek is evidently a connoisseur of contemporary classical music and composes on computer in much the same way as Frank Zappa did on synclavier. He's also written orchestral scores for an ensemble treatment of Terry Bozzio's solo percussion music which debuted in 1999 Vienna. Bully for him, because his role here is solely as first mate Riker to Urbanek's Captain Picard-"Make it so!" indeed. Urbanek, another new face on the international scene, did all of the brilliant composing and arranging on this one and apparently has appeared on more than 35 dates already. My only other familiarity with him is his involvement on a recording of telepathic compositions/improvisations with saxophonists Hans Koller and Wolfgang Puschnig entitled the The Hans Koller Concept. The "concept" must involve mind reading, to some extent, and that recording is much more of a serious chamber-like thing, a solar system removed from the subject matter here.

In fact, I think that's the draw of this record. While its participants make heavily virtuosic, weighty music in other projects, this one oozes with fun, hooks, and fiery, yet not haughty playing. Listeners won't need a jazz resume to dig it. Take the first cut- "Departure"- it's about taking off for sure. The first twenty times I listened to this I thought it had a catchy head, a solo section and a fade. The B3 sections in particular, are such killing distillations of the Bluenote history that you can't help but scream, "I love this!" out your car window as you violate the posted speed limit. I was aghast when I actually realized that I had listened to the tune closely enough to recognize that it had no discernible theme, head or melody, apart from that provided by soloists, not a lick from which is repeated at any time in the tune. In fact I was so intrigued I've listened to this cut about a hundred times since and am still absolutely knocked out by the freshness and newness of it. The tune consists merely of a programmed drum track with a simple bass line, followed in succession by alternating organ and bop-toned guitar solos, which get progressively shorter until that tune ends at 2:26. That's it! Somehow we fall for this hook line and sinker. Why? You're paying attention aren't you? The soloists are so goddamned incredibly soulfully melodic, that's why. If you want to be part of the NGOS after all, that's how you have to play!

The next tune, "Gravity" is intended to pull you back into orbit with an LA Express-era slap-bass fusion shuffle, but there's something going on in the rhythm. You notice the device, which pops up repeatedly, of little motific moog-metallic rhythm enhancements that set up oh-so-nicely against the drumbeats, that drive the rhythm tracks of the tunes and make them unique. MacHacek plays a concise/precise (another defining element of this one) legato solo preceding Urbanek's ultrahip Herbie "dirty rhodes" before the tune fades into a famous Jaco segue -the only obvious rip on the disc. This leads into "The Quiet"'s double-diad bass line over which unfolds what feels undeniably like a Weather Update of a Zawinul tune. MacHacek goes off on this one, beginning in very controlled fashion before taking off into the corona.

"Am/Bbm-Complex" added to your cornflakes'll boost your energy level while slamming jazz mastery up against disco cheese with incredible results, distilling entire catalogues of late 70's early 80's R'n'B- inflected fusion to its essence, simultaneously rendering tons of vinyl recyclable. Urbanek's classically influenced, technically articulated improvisation reaches out and grabs everything Ramsey Lewis and Bob James could ever have hoped to go for during fuzak's Columbia heyday but makes it all happen in about a minute. Meanwhile MacHacek goes off the hook into hollow body- burning-Benson territory, throwing off lightning arpeggios in what seems like individual pick strokes. Bassist Raphael Preuschl takes the opportunity to get off his sole feature on the disc, a nice little octave divider-enhanced solo. If you're like me and listened to some of the above names at the height of their popularity you're grinning from ear to ear after this one, both amazed at the unmistakable effortlessness of what just flitted by, combined with a droll sense of self-deprecation for ever having wasted a hard earned buck on that older stuff. Notice that three tunes into the record, Urbanek has proven he is a bonafide triple threat stylist on piano, Rhodes and organ (not to mention his adeptness with synths) who has absorbed and refined, it seems, every major influence on each.

If you want to hear these guys blow changes listen to "Fools (The Church of Jazz)." In the mood for a quickie piano rhapsody? Try "Entry To Heaven." Want your synth cheese cut with a virtuoso Rhodes? Dig "Planet Pifgonia." If you suddenly want MacHacek to pick every note like Jimmy Herring or Steve Morse you can try this cut too. Tabla beat science? Cue up "In Heaven," where you'll get it under a moog bass line with a real flute solo and the backwards looped legatoisms of MacHacek. "Timewarp" is the most pleasant little modulating piano riff you're going to hear any time soon, sporting a real clean strat-type tone and more killer B3 riffs. You can feel the wind passing through the valves, the drawbars and the Leslie on this one. Man, I'd love to hear these guys do a set of straight up organ trio grooves.

On the last cut, "Stardate", you get a keyboard journey, starting with a piano tour-de- force peppered with Spock samples, combined with Urbanek transported into the deep space coordinates where Mr. Z goes when he gets emotive and downright sad. But just when it's getting a little gloomy, MacHacek's (Han)solo rips her into light speed and takes us back to our enterprise!

"Jim, I am not a writer I'm a doctor!," and my diagnosing scanner indicates that if you were ever interested in any kind of music classified as fusion you need one of these discs at once! See http://www.ng-enterprises.com for more information and get it directly from the Austrian label at http://www.extraplatte.at. Trust me, it's worth the small differential in the freight and the wait plus it beams more currency into the artists' pockets, where it belongs!