Matthews Southern Comfort: The New Mine 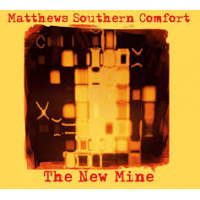 In hindsight, Matthews Southern Comfort's Like A Radio (MIG Music, 2018) seems to have foretold the gloom and doom of the 2020 pandemic. But the fifth album under that moniker (not counting numerous anthologies and live LPs) also spoke to the positivism of change, i.e., streaming music is 'like a radio,' but also decidedly not the same. Perhaps it's not too much of a stretch to apply a similar interpretation to the follow-up and, if so, it may well be an optimistic precursor of a reconfigured normalcy.

A balance of stability and fluidity also earmarks the current lineup of a band that, in its original incarnation—most noticeably via its hit with Joni Mitchell's "Woodstock"—espoused a loyalty to folk, country and rock, presaging what is now described as Americana. Yet, in pointed contrast to much of what passes for that contemporary melange of roots influences, the sound of MSC on The New Mine is as crisp and succinct as its concluding cut, "In My Next Life,"

In addition to assuaging fears of a mere one-off, the similarity in cover graphics for these two Southern Comfort albums, by bandleader/namesake Iain (nee Ian) Matthews himself, also offers a concrete reflection of' his solo career subsequent to his departure from seminal English troubadours Fairport Convention. But, like the slight alteration of his first name in 1989 (to reflect his Celtic roots), the subtle changes and differences between these two efforts still manifest a readily-discernible continuity: like the twists and turns of the man's work over the years, all have their logic and their purpose.

Both of those attributes underlie crucial components to the instrumental sound of this band as it is now constituted. Bart De Win's keyboards, for instance, are almost as prominent as guitars. All four members sing in this versatile ensemble, so their essentially sweet, airy harmonies supply further contrast within the overall arrangement of "The Sacrificial Cow." Gossamer light vocals, in fact, belie a fundamentally sanguine mindset tinged with bitterness that pervades the tune from which this album takes its title, "Working In The New Mine."

The sprightly tempo of the band on that cut is in marked relief to the thoughts at the heart of the song. Yet the performance also leads logically into "Starvation Box," the wizened attitude of which ultimately gives substance to music that otherwise might sound diaphanous to a fault. On the contrary, tracks like "The Hands of Time" radiate a declaration of purpose so resolute it renders moot whether the source of that resignation is age, life experience or a combination of both.

"Patty's Poetry," one of the few compositions Matthews wrote by himself here, reiterates that theme in a context as much creative as personal. The namesake of the group otherwise co-authored much of the remaining material like "C'mon Amigo" and "A Secret Is Gone," with DeVries and Baartmans respectively. Yet even as the former is the sole instances of true gaiety by dint of its banjo and mandolin, that material is still of a piece, not only with its surroundings here, but with past compositions of Matthews' such as his ode to country-rock visionary Gram Parsons "A Wailing Goodbye:" as on the latter, a somewhat elliptical elegy, he prefers the cryptic phrase to the over-obvious word choice.

Independent and self-sufficient as is this incarnation of MSC, this LP, like its predecessor, was co-produced by Iain Matthews and B.J. Baartmans (who also recorded, mixed and mastered the music). In a further demonstration of collaboration, albeit one once removed, the founder of the group continues to nurture his penchant for somewhat eccentric choices of covering material. Thus, this opener, the aforementioned 'Lady of the Canyon''s "Ethiopia" (off Dog Eat Dog (Geffen Records, 1985)), gains further distinction via its timely echo of the 'greed is good' ethos so prevalent in the decade of its release. The methodical pace of the performance sounds designed to implant its implicit theme without succumbing to overstatement.

Likewise, the acerbic tone of the words to "Feed It" counterpoints the vulnerability expressed in the singing, even as the harmonies complement the smooth electric guitars and clockwork precision of the drumming (by honorary member Sjoerd van Bommel). Coming early in these dozen tracks running approximately fifty-minutes, it's a signal The New Mine carries a wealth of provocative sentiment to contemplate as well as a comparably sonorous sound to savor. Hardly mutually exclusive, each major facet of the album nurtures appreciation of the other.

Ethiopia; The Hands Of Time; Feed It; Patty's Poetry; Working In The New Mine; Starvation Box; C'mon Amigo; The Hole; A Secret Is Gone; The Sacrificial Cow; Inbetween; In My Next Life.