Susanna Bartilla: The Look Of Love: Songs Of The Sixties 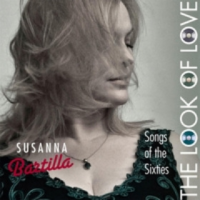 Sub-titled Songs Of The Sixties, vocalist Susanna Bartilla's The Look Of Love presents her interpretations of ten numbers from that decade—from standards such as "Till There Was You" to pop hits like "There's A Kind Of Hush." It's a classic collection, distinguished by some fine interpretations and some surprising song choices.

The Look Of Love follows Bartilla's tribute to Peggy Lee, I Love Lee (Self Produced, 2012), which she recorded in France. Bartilla is now back in Germany, based in Berlin and working with a new band, including drummer Kenny Martin who produced, recorded and mixed this album. While the songs on I Love Lee were linked by their relationship with a single vocalist, those on The Look Of Love are linked by the decade in which they became famous (even if they were written some years earlier). As a result they're a stylistically more diverse bunch, although with one exception they're all love songs. Bartilla's voice works best with the more sophisticated ballads -"Our Day Will Come," "The Look Of Love" -and the poppier songs made famous by female singers, such as "Dream A Little Dream Of Me" (Mama Cass Elliot) or "There's A Kind Of Hush" (Karen Carpenter). All of those songs get suitably romantic instrumental backing, accentuating the strength of Bartilla's voice and illuminating the stories in the lyrics.

The outsider in this collection is "Sunny Afternoon," written and sung by Ray Davies with the Kinks. Bartilla gives it a jolly, upbeat, feel helped by Kelvin Sholar's Fender Rhodes, but it seems out of place here. There's no romance—quite the opposite, as the lyric is sung from the perspective of an arrogant, selfish, drunk who just might have abused his girlfriend. An odd choice, but just one among ten. As for the rest, they all have the look (and sound) of love.

Our Day Will Come; Dream A Little Dream Of Me; Sealed With A Kiss; The Look Of Love; Dream Lover; Till There Was You; Sunny Afternoon; Beyond The Sea; The End Of The World; There’s A Kind Of Hush.

Title: The Look Of Love: Songs Of The Sixties | Year Released: 2017 | Record Label: Self Produced