By C. MICHAEL BAILEY
September 20, 2014
Sign in to view read count
Led Zeppelin II was the second element of the musical binary epoxy that hardened the reputation of the band after the release of Led Zeppelin. "Sonic crunch" is an apt description of II while Led Zeppelin III takes a hard right into new (and, perhaps, unwelcome) territory. 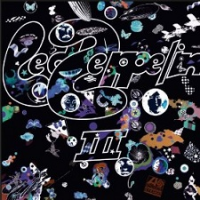 I keep nursing this love-hate attitude toward Led Zeppelin. Partly from genuine interest and mostly indefensible hopes, in part from the conviction that nobody that crass could be all that bad, I turn to each fresh album expecting—what? Certainly not subtle echoes of the monolithic Yardbirds, or authentic blues experiments, or even much variety. Maybe it's just that they seem like the ultimate Seventies Calf of Gold...

...[Whose] albums refine the crude public tools of all dull white blues bands into something awesome in its very insensitive grossness, like a Cecil B. DeMille epic...

...Their third album deviates little from the track laid by the first two, even though they go acoustic on several numbers. Most of the acoustic stuff sounds like standard Zep graded down decibelwise, and the heavy blitzes could've been outtakes from Zeppelin II...

Bangs must not have listened very closely to the first two albums for they both amply contained acoustic guitar. The "Calf of Gold" is a nice touch, though and if LZ was not an "authentic blues experiment," and one more successfully aesthetic than the Rolling Stones, I do not know what one would call them.

Led Zeppelin I, II and III share some commonalities with Francis Ford Coppolla's Godfather Trilogy. The first releases were sublime in depth and breadth. The second unbelievably bettered the first in sheer evolutionary artistry, while the third installments failed to live up to either of the first two. The recording III represents both a departure from the "hard" rock of II and a lack of focus characterizing the first two recordings. In some ways, it seems that Jimmy Page tried to do too much on III, cluttering its sonic landscape with half-written poems and unrealized harmonies.

The opening "Immigrant Song" continues Page's programming practice of kicking off LZ LPs with a ball-busting rock piece. But the paradigm deviates in that there is nothing blues-based about the song. "Immigrant Song" is a melding of the Celtic spiritual sans "the spiritual' with the bone-crushing riff of the recording. "Immigrant Song" is a great rock song, but not a great Led Zeppelin song and not that great a song for 1970. That said, no other song could have added the icy punch the "Immigrant Song" did in promoting the American version of The Girl with the Dragon Tattoo (MGM, 2011). Karen O, Trent Reznor, and Atticus Ross' cover metallically updated the original, making it an unlikely anthem.

The other notable songs include "Celebration Day," "Tangerine," and one of this recording's epochal blues mutations, "Since I've Been Loving You." The former two songs foreshadow Houses of the Holy (Atlantic, 1973), while the latter inserts a downright placid turnaround in a standard slow blues format. The masterpiece of the recordings was Page's adaptation of "The Maid Freed from the Gallows" as "Gallows Pole." This represents the contemporary peak of Page's mixing and making of song styles and genre. Not a strict blues in form, "Gallows Pole" touches on old blues themes of death and redemption laid over an acoustically perfect solution of banjo, guitar, and percussion. Plant is inspired and animated.

In the end, what Led Zeppelin III proved to be was a spasm of unfocused creativity giving light to what the future held for the band over the next two recordings. It was a time of incubation for the band as it approached its creative hinge, an evolution that would bring Zep almost to its complete fruition while changing everything that was to come after it.