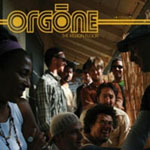 If there's something/ANYthing that you've liked in funk, soul or hip-hop during the last four decades, you'll find something you like on The Killion Floor, the first full-length release from this LA-based funk hip-hop ensemble. This is Orgone's rhythm and blues encyclopedia, an expansive (17 songs, 76 minutes) funk survey refracted through the hip-hop perspective that routinely loops and edits together musical pastiche—except that Orgone is a funk band that plays and sings it all live and hot on the spot. Samples or loops not included.

These first four tracks combine into a suite that honors the greatest little southern soul label that could, Stax Records: You wade in the water through the introductory "Easin,'" a languid, Booker T. meets Pucho Brown organ/conga groove, then singer Fanny Franklin gives voice to every woman whose good love turned sour in the mouth of her lover in "Who Knows Who?" Five minutes of instrumental black magic, "Sophisticated Honky" stings with its sharply barbed rhythm guitar hook, and shines like a lost Stax/Volt diamond. Then Franklin fires up and smokes a genuine Stax hit single, Isaac Hayes' liberation manifesto "Do Your Thing."

And there's just so much more to love: "Hambone" throbs under the canopy of sweeping synthesizers, wriggling toward more experimental, electronic funk directions explored by Mandrill. "Dialed Up" drives you deep into the dance floor, with a bass/drum breakdown that sounds tres chic.

The reggae backbone of "Justice League" sets up the subsequent cover of "Funky Nassau" where, upon Franklin's cue ("Listen to the bassman, gonna make you move your feet"), the bassist rips into the torrid bass line from "Give It Up (Or Turnit Loose)." "Said and Done" resurrects the neo-soul vibe of the late, lamented Brand New Heavies. "Crabby Ali" pulls out yet another thread from this broad funk tapestry, the tubby New Orleans rhythms of The Meters or Neville Brothers.

Like fine sausage ravioli, The Killion Floor comes hot, saucy and overstuffed with meaty goodness. "We draw from a wider musical and production palette than a lot of '60s inspired music that's making a resurgence," suggests drummer Sean O'Shea. "It's not intentional; it's simply a reflection of the music and production aesthetics that we love."

Easin (introlude); Who Knows Who?; Sophisticated Honky; Do Your Thing; A WOT; It