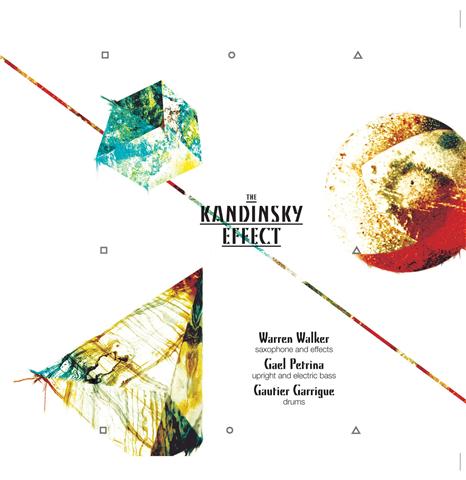 What do you get when you combine an American saxophonist, a self-proclaimed "total gringo" bassist and a French drummer, playing progressive jazz in Europe? There's no one-size-fits-all answer. But The Kandinsky Effect, composed of Warren Walker (saxophone), Gael Petrina (acoustic and electric bass) and Gautier Garrigue (drums), sure as heck blow the roof off the joint trying to figure it out for themselves.

The group's self-titled release finds it turning a number of seeming roadblocks into advantages, creating an organic, forward-thinking record. First and foremost, despite (or maybe because of) their disparate backgrounds, all three musicians are on the same page, and their communication on this record borders on the telepathic. Though the album is relatively through-composed, just listen to "Flow," the aptly titled closing track. Petrina starts off with a complicated ostinato bass line on acoustic. Garrigue quickly joins him and they're off to the races. Walker enters soon afterwards, unhurried even as he catches up to the pace set by the rhythm section. Abruptly, the band flows into a second, darker section, leading to a Walker solo. Flying up and down the register of his horn, Walker achieves Chris Potter—like tension and release. But make no mistake, he is merely following the beat set by Petrina, whose bass is ever-present. Walker then lays out, leading to a short composed section and a Garrigue solo accompanied by Petrina.

Remarkably, in the middle of the solo, both players halve the tempo at the same exact moment, and then pick up again. A blip on the radar screen, but something only two simpatico players at their most in-the-moment could have accomplished. The rest of the tune devolves into a series of echoes and electronic effects backed by Garrigue's staunch groove, before returning to the original quick theme. The group's single mind is able to make what could very easily be a complicated listen into 6:34 of bliss.

Then there is the instrumentation. Saxophone, bass and drums is a notoriously difficult idiom with which to keep listeners interested, as noted here. But it's the variations on the traditional trio that make this album one that listeners will return to time and again. Walker's use of effects, both through his saxophone and otherwise, is new and different but always tasteful, while Petrina's electric bass proves quite refreshing. With spare instrumentation such as this, the tendency is often to overplay in order to fill the void, but at no point does The Kandinsky Effect try to do too much. The group stays well within its capabilities and lets the compositions speak for themselves.

Finally, there is the place. All three musicians are based in Paris, and the album was recorded in Basel, Switzerland. Neither city is exactly a world-renowned jazz hub. The location, however, proves liberating. There is no pressure on the group to conform to blues-based, American jazz expectations. For sure, The Kandinsky Effect are steeped in blues tradition. Just listen to "New Year's Day" and revel in its dark funk. But The Kandinsky Effect succeeds because of its ability to combine the diverse influences of the bandmembers into a coherent whole. Case in point: there is only a single cover on the album, "Girl/Boy Song" by Aphex Twin, the electronica pioneers.

The Kandinsky Effect is an album that can be appreciated on many levels—a cursory listen is perfect as conversation-starting background music at a Parisian soirée, while a closer listen rewards listeners with moments such as the halving of tempo in "Flow" described above. Walker, Petrina and Garrigue will continue to be heard from as they develop their individual and collective sounds.

David is a longtime music lover whose tastes continue to expand as great music is put out each and every day.