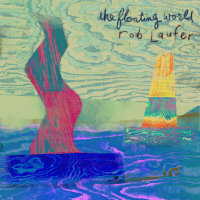 Rob Laufer's first album in nine years, The Floating World, will no doubt compel repeated listenings after the first one, if only so the curious music lover can better distinguish how much he or she might have missed on that initial hearing. While the LP's main touchstones are a bit obvious, the process of distinguishing the various sources of inspiration only adds to the pleasures.

For instance, there is a certain nonchalant confidence in Laufer's singing and playing on "Highway Machine" that recalls The Beatles' late work. It is a virtue that accompanies his recording, mixing and producing credits here, efforts that took on something of a life of their own following an inspired spate of songwriting, the completion of which ultimately led to demos not far removed from sprightly tracks like "Bold of Blue."

Subsequent finishing touches provided to such cuts are invariably as astute and tasteful as Eric Drew Feldman's organ and horns. On the doleful "Avalanche" too, Dave Pearlman's weepy pedal steel complements Laufer's purposefully wan vocal, thereby validating the PR description of this music as 'dreamy power pop'—think Matthew Sweet's quieter moments. Meanwhile, Reuben Cohen's mastering ensures that all those textures are faithfully replicated, as with the violin and cello—from Lyn Bertles and Matt Cook respectively—which imbue the album with just a hint of the baroque.

Hardly a household name, Laufer nevertheless reaffirms a well-honed pedigree with this sixth album of his. Collaborations with the eccentric likes of Frank Black and Fiona Apple, in addition to spearheading charitable work as head of The Wild Honey Orchestra, are all personal endeavors close to his heart, deeply-felt motivations which percolate within originals such as "As Long As You Belong." In sharp contrast, "Space + Time" rises to the fore via muscular electric rhythm guitar plus a searing solo, the motion within the musicianship and the composition helping pace these ten tracks.

ADVERTISEMENT
Immediately following is the slightly disembodied rumination of the appropriately-named title cut. Evoking memories of John Lennon singing "Julia" on The Beatles (aka The White Album) (Apple, 1968), the re-occurrence of acoustic piano at that very point adds further sonic variety to The Floating World. And on "Fence," Laufer displays a sense of whimsy similar to Lennon's, explaining in part this Los Angeles native's participation in various tributes to that iconic band over the years (with their late producer, George Martin, and Cheap Trick).

If "Hippie Love" also recalls the Tom Petty of solo fame (or the Traveling Wilburys), a closer listen also reveals harmony vocals and varied percussion that skillfully (re-)create the ambiance of a fully-functioning band, not just overly-detached overdubs of solo musicianship. As with the deceptively primitive cover art which Laufer rendered himself—where the more you look the more you see—there is plenty more going on than first meets the ears during The Floating World.