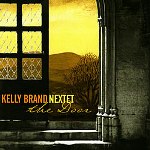 One of the things I miss most about no longer living in the Chicago area is seeing and hearing groups like pianist Kelly Brand's Nextet, known only to a small number of enthusiasts in the immediate neighborhood but deserving a much wider audience. One of the musicians I miss most is trumpeter Art Davis, a bellwether of the ensemble who has long been an admirably resourceful improviser and one of the Windy City's unsung treasures.

True story. Some years ago, when Brand was upset by a harsh and unflattering review, I said to her, "Shrug it off, Kelly. Keep doing what you're doing. You're a fine musician, and your day will come. She did, she is, and it has. The Door, Brand's fourth recording as leader and first for Origin Records, is a consistently delightful session and a sparkling showcase for her several talents, as she not only comps and solos with assurance but wrote and arranged everything save Wayne Shorter's sensuous "Night Dreamer, to which she added lyrics.

Mari Anne Jayme, a crystal-voiced contralto, breathes life into those words, as she does "An Old Road and "The Question. Augmenting the group on "The Question is Brand's and bassist/husband Kelly Sill's daughter, cellist Naomi Sill, who helps make it truly a family affair. Among the instrumentals, two that expressly grabbed my ear are "Ding Song and "Bitter Blew the Winds of March, the first performed by the Nextet (which is actually a quintet), the second by Brand, bassist Sill and drummer Jon Deitemyer.

Davis offers several trim, well-reasoned solos, as does tenor saxophonist Geof Bradfield. The full Nextet is present on half a dozen selections, while the trio backs Jayme on "Road, and a quartet (including Bradfield) does the honors on "Dreamer. As befits its title, the session opens with the sound of a doorbell ringing, followed by a door opening, and ends (about ten seconds after the final note) with the sound of a door being closed.

Based on what she and her colleagues have done here, that door definitely isn't closing on Kelly Brand's career. Quite the contrary. Once unlatched and open, The Door should lead to any number of agreeable avenues, all of them teeming with promise, not to mention ample and well-deserved praise for the Nextet.