Needlepoint: The Diary Of Robert Reverie 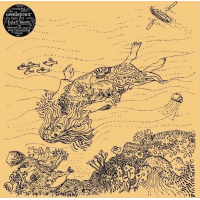 Norwegian band Needlepoint's fourth release for BJK is an intriguing one, full of vocal-based songs that twist and turn at every opportunity. The near-title track "Robert Reverie" contains a skilfully fast and labyrinthine guitar solo from Bjørn Klakegg, underpinned by wistful words, riff-laden bass and keyboards. and energetic, surgically precise drumming. By contrast, Nikolai Hængsle's Hugh Hopper-esque fuzz bass heralds the opening to "On The Floor," which despite its relatively menacing beginnings, develops into a number resembling a cross between early Pink Floyd and Soft Machine.

"All Kinds Of Clouds" mingles Byrds-like vocal harmonies with Caravan organ lines, and as with "Will It Turn Silent," these songs' lyrics have a curiously late-1960's feel to them. The English language vocals, as heard on "In My Field Of View" for example, even begin to recall those of Caravan's Pye Hastings, albeit with a slight Scandinavian twang. Despite boasting Hængsle, bassist with the redoubtable Elephant 9, Needlepoint isn't strong on the jazz front on this occasion, but there are, nonetheless, similarities between the band and the jazzy sensibilities of, say, Hatfield And The North and their ilk. Yet there are certainly some complex rhythms as revealed on "Beneath My Feet" replete with satisfyingly intricate drumming. Whilst the band is rightly vaunted as a jazz-rock outfit, this particular album is devoid of much jazz, substituted instead by pastoral melodies and fairytale lyrics, as printed on the six-sided digipak, which also sports elegant cover art. The Diary Of Robert Reverie is, nevertheless, a perfect example of prog/psych rock executed at its best.

Robert Reverie; On The Floor; All Kinds Of Clouds; Will It Turn Silent; In My Field Of View; Grasshoppers; Beneath My Feet; In The Sea; Shadow In The Corner.