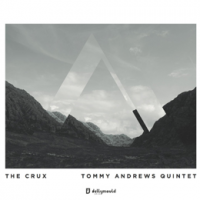 Saxophonist, clarinetist, composer and rock climber Tommy Andrews is part of a burgeoning British jazz scene, a scene that's notable for its wide range of talented young players. For The Crux, his first album, Andrews joins with four more members of the scene to form his quintet. It proves to be a fine band, sympathetic to Andrews' melodic, accessible, compositions: the result is a promising debut.

On the evidence of The Crux Andrews' compositions are characterized by an easy, relaxed, approach: through-composed but with space for improvisation (he wrote these pieces with the quintet's members specifically in mind). The band shows itself to be eminently capable of bursts of energy and even aggression, but these are relatively infrequent forays away from a calmer and more controlled approach.

"Sirens" shows the band at its most delicate, each player demonstrating a sensitivity to the tune's lyrical melody. On "L.H.B." Rick Simpson's piano leads the quintet in a slow, mellow, ballad that eventually builds to a more urgent climax. There's a touch of prog rock's drama as well ("Toscana (Sirens Part II)). "The Crux" and "Steep" take their cue more directly from contemporary jazz, as does "Mr Skinny Legs."

Simpson is the most attention-grabbing of the quintet, his solos often forceful and dynamic. Andrews himself is a subtle player, crafting intricate and flowing lines in his own solos on tunes such as "Steep." Guitarist Nick Costley-White shares Andrews' subtlety, an unselfish player whose unison playing with the saxophonist is a hidden gem of the album and whose solos and lead lines are similarly understated yet effective. Drummer Dave Hamblett shares Simpson's assertive approach while Loop Collective co-founder Dave Manington contributes some well-judged bass lines (his playing on "Crystal Car" is especially graceful).

The Crux is a well-crafted album, with both writing and playing showing a mature combination of technical skill and a willingness to entertain. It would have been great to hear a little more of the energy and power the players show themselves to be capable of, a few more moments closer to the musical edge, but there is still plenty to enjoy on The Crux.