By Phil Barnes
December 7, 2013
Sign in to view read count 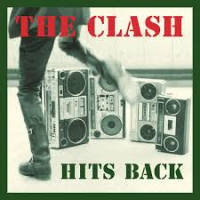 Nearly eleven years have passed since Joe Strummer's untimely death on 22 December 2002, and yet the music he, Mick Jones, Paul Simenon and Topper Headon made is still held in great affection by fans across the globe.

Part of the reason for this longevity is the sheer quality and breadth of inspiration of the music that the Clash packed into a frenetic four year period from the release of their UK debut in April 1977 to the sprawling treble album Sandinista in December 1980. It is these two albums plus their classic third, London Calling, on which their reputation largely rests—while Give 'Em Enough Rope and Combat Rock had their moments, largely compiled in this set, most view them as lesser works. The musical breadth they demonstrated from the rockabilly cover of Vince Taylor's "Brand New Cadillac" to the punk-Motown of "Train In Vain," the dub influenced "Bankrobber" and the early rap of of "The Magnificent Seven" was staggering in the context of the times, opening the ears of a generation to wider sound possibilities than the mainstream allowed.

All of these classic tracks are present and correct on this collection alongside their biggest hits "London Calling," "Rock the Casbah" and "Should I Stay or Should I Go." Hits Back's quirk is to arrange studio recordings to follow a set list from the Brixton Fairdeal in May 1982, with seven notable tracks not played that night being added to the end. Hardcore fans will quibble over the track listing, the versions selected, and question whether we need yet another collection but this is mostly not aimed at them. This is for the curious looking to sample all things Clash and is probably as good a place to start as any, offering the non-album A-sides into the bargain.

The official justification for the 2013 wave of Clash reissues, that includes this collection, individual CDs and the more comprehensive Sound System box, was that all previous versions missed some of the music recorded due to a mal-functioning tape head—the corollary being that this would be the way to best hear what the band actually recorded. In spite of a certain amount of industry hyperbole, the good news is that the sound across this collection and the remastered albums is uniformly good, slightly improved even, with audible step change improvements on the tracks from the Sandinista and Combat Rock eras.

What has proved fiercely divisive amongst the UK fan base, however, has been a combination of this being the third time the back catalogue has been reissued on CD, and the pricing of the companion Sound System box at an eye watering £100. What you get for your money in that case is around two CDs of rare material that was either previously unreleased or not separately available in the remastered form.

Why this matters is the other reason that the Clash are held in affection by many and that is the ethical, humanist, way that they conducted themselves during their time in the spotlight. The Clash were emphatically about not selling out, trying to move forward artistically and not taking the money from fans just because they could. It would have been easy for them to repeat London Calling ad nauseum throughout the 1980s and been stadium-huge by the time the world caught up with what they were doing—but they didn't, they kept moving and changing in a way that few of their contemporaries could match. So for example there are many examples of free concerts for fans, London Calling was meant to be a single album with a giveaway 12" single that mysteriously morphed into a second LP under CBS' nose and Sandinista was a treble album retailing at £5.99, when new release single albums typically cost around £4. The band bore the cost of this through agreeing to CBS' condition that they waived UK royalties on the first 200,000 copies—roughly London Calling's UK sales in 1979/80 and then by far their biggest market. Even though the reissues and Sound System itself have band approval, it's not hard to see why ghetto blaster shaped box sets including large cigarette shaped poster holders and Clash dog tags sit rather uncomfortably with the original ethos of the band.

So while the music on this two CD set is unreservedly recommended to the uninitiated looking to dip their toe into the back catalogue, there is an inevitable heaviness of heart for existing fans who will own all of this material many times over. The pricing and packaging games of the box set also leave a nasty taste in the mouth that almost overshadows the improvements in sound quality. The Hits Back collection arguably also has the merit of being a cheap and accessible sampler for the individual remasters, but whether you go beyond that is a question of how much you hear the differences on your system and are prepared to hold your nose as you click "confirm purchase." Over to you.