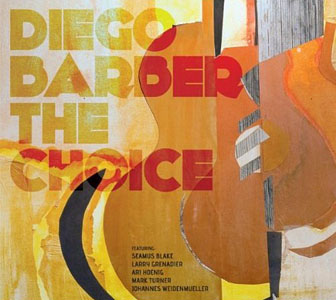 The precociously talented Diego Barber is known for the grandeur and majesty of his playing. The fabulous report of the guitarist's tone, his impressive dynamics and exquisiteness of expression are deeply rooted in extraordinary technique. Moreover, Barber is able to make extremely complex harmonic leaps, as well as twist the simplest of melodies into lines uniquely entwined with timbral beauty, ensconced in a dazzling palette of shades. His magnificent abilities were on display on Calima (Sunnyside, 2009), where he appeared to have reached a new zenith of talent. But his wizardry knows no bounds, and The Choice swings dramatically, even as it tells more epic stories from places close to his heart. This time around, Barber creates steamy and ingenious compositions that reflect the heat and dust of Mauritania, which is across the Maghreb, on the West of Africa, where the warm waters of the South Atlantic wash over Moorish land populated principally by Berber and Bafour peoples.

Informed by shades of rust and the desolate brown earth of the Western Sahara, Mauritania—and certainly the steaming heat that sets the North Western Africa ablaze—this album billows incredible energy. Although some of the music is personal in nature, describing elegiac encounters with people close to the composer, such as the rhapsodic "To Annie," the second half of the album is a deeply impressionistic musical sojourn across the part of the African continent that Barber visited before he was inspired to write some of this music. The journey begins in the Canary Islands and Spain, described in beautifully conceived work on "Jose's House," "Ailanto," and the dusky "Pittaluga," which weaves West African blues as well as the classical strains of Barber's invention into a meandering tale of wonder. A swinging "Chicago" stands alone as a chart where Barber's blues meets the idiom of jazz, before Barber embarks on an epic journey through the reserve of Banc D'Arguin that stretches between Nouakchott, the capital of Mauritania and the Northern citadel of Nouadhibou.

Barber's guitar becomes his Homeric lyre, capturing the rhythm of undulant camels traversing the great expanse of brush, desert and verdant land. The ebb and flow of the Atlantic waters seem to pervade in the rippling harmonics that sweep across especially the melody of "Nouadhibou," the first part of Barber's epic suite, "Sonata Banc D'Arguin." Barber's playing is sublime, not only in the manner in which he makes the land come alive, but also in the unbridled technique he displays throughout this suite. "Mauritania," the middle part of the suite is a brooding reverie that captures the proud and erect Berber and Bafour. Indee,d the romance of this land and its peoples cuts deep into the composition and is couched in some of the repetitive triads that Barber plays, while "Nouakchott" provides the dramatic release in the tension, as Barber brings his epic memorable journey home.