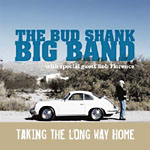 Just in time for his eightieth birthday, Jazzed Media has released renowned alto saxophonist Bud Shank's first-ever album as leader of his own big band, the aptly named Taking the Long Way Home. From the opening bars of Mike Barone's rhapsodic "Rosebud, it's clear that Bud is having a marvelous time, and one can't help wondering why he hadn't done this before.

Simply a matter of happenstance, he explains: "Despite growing up in the big swing band era, it just never happened to me. After playing in the [Charlie] Barnet and [Stan] Kenton bands, I went straight to the Lighthouse All-Stars and from there on it was small groups. Well, better late than never, as the saying goes. On this concert date, taped in May '05 for an appreciative audience at the Sheraton Four Points Hotel in Los Angeles, Shank plays like he's driven to make up for lost time, unearthing an immense wellspring of drive and dexterity that would be the envy of musicians half his age. His tart and instantly recognizable sound is a decided asset, as is his remarkable ability to swing in any framework. If the maestro has lost any ground to Father Time, it's certainly not evident here. As one who was in the audience that day, I can bear witness that the concert was uninterrupted, with no overdubs, false starts or second takes.

Even though this is unequivocally Shank's album from downbeat to coda, Barone almost steals the show with his superlative compositions "Rosebud and "Limes Away, and his seductive arrangement of Bud's warmhearted tribute to clarinetist Artie Shaw, "The Starduster. The concert's picturesque finale, "Taking the Long Way Home, is an extended tour de force for Shank's expressive alto, commissioned by his wife, Linda, and written by the great Bob Florence (who conducts and plays piano) to help celebrate Bud's 75th birthday. Bob Cooper arranged Bill Evans' charming "Waltz for Debby and wrote "Greasiness Is Happening, Manny Albam arranged Cole Porter's "Night and Day, and Shank reupholstered an arrangement of the standard "The Night Has a Thousand Eyes that he borrowed from trombonist Jiggs Whigham.

Shank's alto is the focal point on the enchanting curtain-raiser, "Rosebud, whose melody is vaguely reminiscent of Charlie Parker's "Yardbird Suite —and as it turns out, that's the rule rather than the exception. Even though his ensemble is loaded with persuasive improvisers, Bud takes most of the solos himself. And so one never hears from such aces as Ron Stout, Lanny Morgan, Jack Nimitz, Andy Martin or Christian Jacob, among others. It's not until track 5 that tenor saxophonist Doug Webb (sitting in for Pete Christlieb, who couldn't make the gig) is given room to blow, and he and Shank are volcanic on "The Night Has a Thousand Eyes. Trumpeter Carl Saunders adds three riveting choruses on the mercurial "Limes Away, based on the standard "Limehouse Blues, before he and Bud share another. The rest is all Shank, and if it were almost anyone other than Bud I'd have a problem with that.

There's certainly no reason to cavil about anything else, least of all the band itself, which is thoroughly awesome, from its impeccably bonded brass and reeds to the assertive yet tasteful rhythm section (Jacob, bassist Joel Hamilton, drummer Kevin Kanner). Shank, whose clipped phrases have something of a Buddy Rich quality, says a few words about each number, and at the end of the concert, Ken Poston, founder/director of the Los Angeles Jazz Institute, which sponsored the event, introduces the members of the band.

The album's 68-minute playing time is splendid, and as for the sound, I've heard many a studio date that couldn't measure up to this live recording. Kudos to recording engineer Tim Pinch and to Rod Nicas who handled the mixing and mastering. The icing on this birthday cake, of course, is the inimitable Bud Shank himself, as sharp, enthusiastic and resourceful as ever as he turns eighty years young. A closing thought just sprang to mind—wouldn't it be great if Bud were to take home a Grammy Award for his first big-band album?

Tracks: Rosebud; Waltz for Debby; Greasiness Is Happening; Night and Day; The Night Has a Thousand Eyes; The Starduster; Limes Away; Taking the Long Way Home (68:14).

Rosebud; Waltz for Debby; Greasiness Is Happening; Night and Day; The Night Has a Thousand Eyes; The Starduster; Limes Away; Taking the Long Way Home (68:14).