By KURT GOTTSCHALK
November 4, 2005
Sign in to view read count 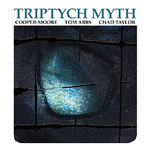 With the formation of his Triptych Myth trio several years ago, Cooper-Moore announced his intention to return to the days of a working group, as opposed to the one-off meetings that dominate the jazz scene. He has also lamented the fact that his handmade string and percussion instruments have left him considered a novelty, rather than a serious musician. On this, the second recording by his trio with bassist Tom Abbs and drummer Chad Taylor, Cooper-Moore has seriously addressed both concerns.

The aptly titled The Beautiful is a remarkable piece of piano trio jazz. As on the group's previous self-titled disc (Hopscotch, 2003), Cooper-Moore plays piano exclusively. Abbs, too, is stripped down and focused, without a didgeridoo or violin strapped to the bass, or the high-hat or tuba he sometimes doubles on.

The band has grown since its first disc. These players sound strong and confident, and even more so last month at Tonic, where they played the record from beginning to end. Without telling stories, without hollering, without his trademark mechanic's suit, Cooper-Moore presented an excellent band in the classic tradition to which he's aspired. He bounced against Tatum, ricocheted off Monk, and put an English on Cecil Taylor, dropping in bits of Vince Guaraldi, spinning the jazz vocabulary against his own unabashedly beautiful themes.

At times the group plays together, exploring the leader's simple themes, but on occasion players splinter off. On "Pooch, a track dedicated to the late bassist Wilber Morris, Cooper-Moore and Abbs vamp on an elegiac melody while Taylor plays a surprisingly fast and nicely mismatched solo over it. Elsewhere, the piano and drums pair up, leaving the bass to fly alone.

Played with half the muscle, this new set of compositions could be considered cocktail music. But since it isn't, that's irrelevant. Instead, the band says, "Listen to these seven notes. Think about these seven notes. Understand these seven notes. They seem for the first time not like they're trying to entertain so much as present their work—a gamble, perhaps, for such charismatic musicians, but one that pays off.