Peter Brendler and John Abercrombie: The Angle Below

By BRUCE LINDSAY
October 10, 2013
Sign in to view read count 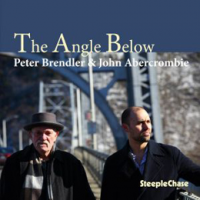 Peter Brendler and guitarist John Abercrombie have developed their playing partnership over a number of years, but The Angle Below is their first duo recording. Brendler—"the guy on the bass" as he's described in Neil Tesser's sleeve notes—is the nominal leader but he refers to the album as a collaboration. He's not wrong. He may be the driving force behind the project, the man who sorted out the studio, booked the dates, contacted the press and made the coffees, but as soon as the bass and guitar open "Downhill Runner" it's clear that this is a joint venture—a very successful joint venture.

Abercrombie has a long and distinguished discography, with over 50 albums as leader. Brendler, the younger man by about four decades, doesn't quite match that number, but his reputation is building. Brendler takes the lion's share of composer credits—six, to Abercrombie's three, plus a cover of Gordon Jenkins' "Goodbye." There's a gentle, almost genteel, quality to the tunes with Brendler's earthy, full, bass tone contrasting well with Abercrombie's bright, metallic electric guitar.

In 2010 Brendler joined drummer Barry Altschul on Jon Irabagon's Foxy (Hot Cup Records), a full-on, fiery, high-energy slab of jazz that took few, if any, prisoners. It also demonstrated Brendler's power and strength as a player. The Angle Below requires a different set of skills from the bassist—a subtler, more nuanced approach to the instrument. He shows himself to be eminently accomplished at this—his composition for solo bass, "Rockaway," is calm and meditative.

One of the most impressive features of The Angle Below is the way in which the interplay between Brendler and Abercrombie develops within each tune. There are unison passages but for the most part the two musicians work as a lead and rhythm duo. While that might suggest a traditional partnership with the guitar taking on the melody and the bass establishing a rhythmic foundation this collaboration finds both men moving between the two. Abercrombie's "Jazz Folk" is an especially fine example of this interplay, but it's a common motif across the album. The switches between roles are achieved so smoothly that it takes a few seconds to realize that they've happened, a testament to the relationship that the players have on this beautifully-recorded and rewarding album.

Downhill Runner; Half Dozen Of The Other; Nick Of Time; Valdoviño; Jazz Folk; Misdirection; Rockaway; Six Of One; Sweet 126; Goodbye.