By NENAD GEORGIEVSKI
November 14, 2020
Sign in to view read count 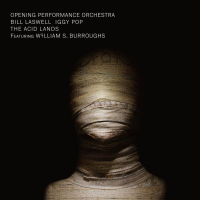 The legendary literary outlaw and cult personality William Burroughs has had a lasting influence on literature, pop music, film, and contemporary art. Although a controversial figure due to his impenitent heroin addiction, occult dabbling, the spread of conspiracy theories, and firsthand experiences in the criminal underworlds, he still inspired musicians from The Beatles, Bob Dylan, Led Zeppelin, David Bowie and The Rolling Stones to Kurt Cobain, Tom Waits, Sonic Youth, Patti Smith, Joy Division and many others. All of these went to Burroughs in a quest for authenticity and served as a rite of passage for those seeking new experiences and artistic frontiers. His influence on generations of writers, visual artists, and musicians is pervasive and still continues to this day. There have been many recordings of his readings or snippets sampled in other people's songs.

Another record where Burroughs's work provides the inspiration is The Acid Lands, a collaboration between the Opening Performance Orchestra, bassist and visionary Bill Laswell, and singer Iggy Pop, who takes on the role as a narrator of Burroughs' writings. The music on The Acid Lands was first performed live by the Opening Performance Orchestra in 2014 at a festival in Ostrava, the Czech Republic to mark the centenary of Burroughs' birth, but it featured other guests as to those appearing on this studio recording. This studio meeting has taken the three parties further into an experimental drone zone, traversed by means of modular synthesis. The result is a mesmerizing and hellish trip.

For Laswell and Iggy Pop, however, this is not their first collaboration on music centered on William Burroughs' works. Previously, Laswell had recorded Seven Souls (Virgin Records, 1989) (or The Road to Western Lands when it was reissued on 1998) with his group Material, where Burroughs was sampled reading excerpts from his book Western Lands, and on Material's Hallucination Engine, (Axion, 1994) where he recorded another song "Words of Advice." Laswell and Iggy Pop not only had worked together on regular songs (as on Ryuichi Sakamoto's "Risky" from Neo Geo (Sony Music, 1987)) but also on Laswell's Hashisheen: The End of Law (Sub Rosa, 1999), where Iggy Pop reads excerpts from Burroughs' writings about Hassan-i-Sabbah (or the Old Man of the Mountain) and his Assassins sect, a character also present in this novel. His motto "Nothing is true; everything is permitted" was taken to heart by Burroughs, who often repeated it in interviews or in print. Laswell has taken that to heart as well and it has imbued his understanding of music and how he has approached it—without any boundaries. Burroughs' book "Western Lands" is the conclusion of a trilogy and it takes its title from Egyptian mythology about the afterlife. Apparently, the Western Lands represent a type of Elysium that lies beyond the Land of the Dead. The book is a chaotic mixture of various characters that move back and forth in time and place, and by doing so Burroughs expresses his nihilistic views of a planet in disarray.

On The Acid Lands which is a wordplay, the music is divided into two lengthy compositions and one short one. The Opening Performance Orchestra creates almost menacing atmospheres, full of experimental sounds, drones, and eerie effects that sound like descending into the afterlife. On top of it, there are readings of Burroughs' texts by Iggy Pop which are then followed by Burroughs' own readings. The dense soundscapes surround the voices which overall gives the impressions of sonic hallucinations The first composition ebbs and flows effortlessly from one cluster of sounds to another with its darkish analog, Berlin-school electronics (early '70s Tangerine Dream period) and spacey yet suspenseful ambiance. The way it is structured it evolves in sections as one section melts into the next. Every single sound and section symbolizes the dangers that pilgrims meet on the road to the Western Lands. Despite the impending noise in certain sections, the composition sounds more like a carefully composed classical work than an unrestrained piece of noise and otherworldly sounds.

The second track is actually Laswell's ambient translation of the first track without the readings. The emphasis is on the music itself without the hallucinogenic and menacing voices. There is a sense of dramaturgy as both the orchestra and Laswell masterfully explore shape and depth as sounds metamorphose. The mood grows markedly lighter but no less menacing and claustrophobic as the track progresses. With each new segment, the composition moves into a twilight sound world of slow-motion musical gestures and elusive fragments.

The Acid Lands sounds like some obscure and subtle ritual of an advanced, post-industrial culture. The result is delicate music that intrigues and envelops with its disturbing sense of mystery.