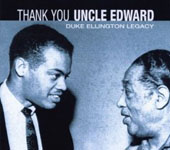 Duke Ellington Legacy is a musical consortium initiated by guitarist Edward Kennedy Ellington II, a grandson of the musical Duke. He met saxophonist/composer Virginia Mayhew in 1987, and by 2004, Ellington wanted to so something tangible about his ideas, turning the process over to Mayhew.

Thank You Uncle Edward is the product of her toils with a nonet of first-rate musicians playing a mostly Duke Ellington set list. The saxophonist was responsible for recruiting the ensemble as well as the arrangements. In addition, a fair share of accolade should go to pianist Norman Simmons, who not only provides solid playing but adds new arrangements.

Mayhew has previously proven her ability to deliver albums that include her own arrangements and exciting tenor and soprano saxophone solos. On Thank You Uncle Edward she leaves the soprano sax in the case and contributes a number of tenor sax solos, including a booting one on her own composition "Toe Tickler," a tribute to Lester Young and the only non-Ellington tune on the album.

A number of highlights offer testament to the musicians and the concept of the album. Baritone saxophonist Joe Temperley shines on the ballad "Moon Mist," "Pretty Woman" and the concluding "Come Sunday." Trombonist Wycliffe Gordon is heard often, with noticeable solo work on "In A Sentimental Mood" and the semi-Latin "Caravan." Trumpeter Mark McGowan provides a sparkling solo on the opening "Perdido." Pianist Simmons gets to solo on approximately half of the tunes and Edward Kennedy Ellington II solos on the opening of "Moon Mist" Vocalist Nancy Reed is given a golden opportunity, making the most of it by singing on five tracks including the tongue-twisting lyrics of Jon Hendricks "Cottontail," the exemplary ballads "Day Dream" and "Come Sunday," and a swinging version of "Perdido," featuring a new Norman Simmons arrangement.