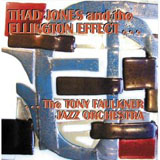 What an intriguing idea. Thad Jones and the Ellington Effect is based on a Master's dissertation completed some years ago in which composer/arranger Tony Faulkner argued that Duke Ellington was a major influence on Thad Jones "in his development of Ellington's innovative procedures as well as in his reliance on the abilities of the musicians in the orchestra he co-led with drummer Mel Lewis from 1966-79.

The dissertation led Faulkner to write a seven-part suite, each of whose movements represents a chapter in his paper. The music, he writes, "isn't intended to sound like Ellington or Jones [it doesn't], but given that many of the procedures established by both composers have become part of the standard language of orchestral jazz, it is inevitable that those procedures will be evident in the music of the suite....

What is also evident is that Faulkner is a talented contemporary composer who takes the building blocks created by Ellington, Jones and others and scrupulously recasts them to accommodate his singular point of view. Each of the movements, Faulkner writes, represents an aspect of the Ellington-Jones liaison, starting with "Abstract, which contains the melodic fragments and some of the harmonic and rhythmic devices used and developed throughout the rest of the suite.

"Duke Ellington recaps the emergence of Ellington as a composer and bandleader, while "Thad Jones and Mel Lewis sketches musically how the two came together to form their innovative big band. "The Ellington Effect denotes Billy Strayhorn's definition of the Duke's influence on his own orchestra as well as other bands including Jones-Lewis. "Portraits draws comparisons between compositions by each of the composers while "Master of Surprise is an extended romp through the modern-day Jazz canon. "Aftermath, writes Faulkner, "is intended to indicate part of the way in which the traditions of jazz orchestration and composition established by Ellington and expanded by Jones can be moved forward.

Whether or how well Faulkner proves his point is up to the listener to decide, but his compositions are persuasive, his orchestra keen and up to the task (even though the sound is sometimes less than passable and especially hostile to the trumpets). Fans of Duke Ellington and/or Thad Jones should find the suite especially absorbing, while there's enough splendid music on offer to please almost anyone who leans toward the cutting edge of contemporary big-band design.