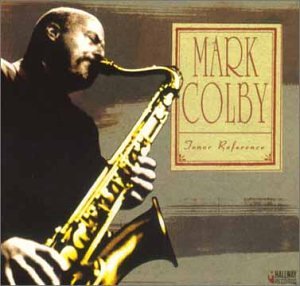 There are a great many talented post-bop tenor saxophonists on the scene today, but no more than a handful whom one could easily recognize in a lineup. Here's one — Mark Colby, a consistently resourceful stylist who's not more widely known among Jazz cognoscenti only because he has chosen to make Chicago his home instead of New York City or Los Angeles. One of the things I've always admired most about Colby — aside from his gorgeous tone, prodigious technical skills and unbridled imagination — is his unbending commitment to going his own way, much like Lee Konitz, Wayne Shorter, Rahsaan Roland Kirk and other trail-blazing reedmen. That may not draw the sort ot audiences who come to hear Kenny G practice his scales, but at least Colby can sleep well knowing he has given his listeners the best he has to offer. Tenor Reference, recorded without a safety net at Chicago's venerable Jazz Showcase, unsheathes Colby's forceful tenor in a quartet comprised of longtime friend and colleague Vince Maggio on piano and two of the Windy City's most accomplished timekeepers, bassist Eric Hochberg and drummer Bob Rummage. The quartet is enlarged on two numbers — "Riley?s Thang," "Bloom?s Room" — by trumpet virtuoso Rob Parton, in whose big band Colby regularly performs. Completing the well-chosen menu are a trio of standards — "Beautiful Love," "My One and Only Love," "Softly as in a Morning Sunrise" — Ron Miller's pensive "Bar Room Ballad," Andy La Verne's spicy "Sabra" and Colby's "Blues of a Kind." "Ballad" is a duet with Maggio who may not be able to read Colby's mind but is nonetheless able to anticipate his every move and react accordingly. Mark's modus operandi is hard to explain other than to say that he's seldom at a loss for a concise and plausible phrase and achieves his purpose with a maximum of melodic and harmonic awareness and a minimum of squeals, squawks and other unpleasant excesses. Among his contemporaries, Colby reminds me most of another enterprising yet underrated iconoclast, Don Menza. Like Menza, he is a marvelous balladeer whose natural warmth and tenderness are especially engaging on "Bar Room" and "My One and Only Love." He's also a world-class sprinter ("Morning Sunrise," "Saba") with a deep-seated passion for the blues ("Bloom's Room," "Blues of a Kind"). In an age of narrow specialization and cookie-cutter similarity, Mark Colby is the complete package, as close to a Renaissance man on the tenor as one is likely to encounter, and Tenor Reference embodies some of his finest work to date.

Beautiful Love; Blues Of A Kind; My One And Only Love; Softly, As In A Morning Sunrise; Riley's Thang; Bloom's Room; Bar Room Ballad; Sabra. (Total Time: 73:53).