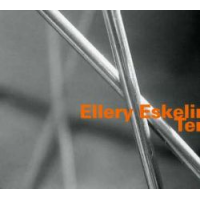 It would have been way too predictable if tenor saxophonist Ellery Eskelin had celebrated the tenth anniversary of his trio with accordionist/pianist/sampler player Andrea Parkins and drummer Jim Black by putting together another record like the seven they have already made. He's never been one to rest comfortably with the safe and sure—and to be honest, there's never been anything either safe or sure about his work with Parkins and Black, which is the reason they've remained a group to watch.

But Ten is an adventure into a new sort of uncharted territory. Eskelin recruited three players to join his longstanding improvising trio: vocalist Jessica Constable, electric bassist Melvin Gibbs, and electric guitarist Marc Ribot. They appear in various combinations from duo to sextet, and each of the twelve tracks is freely improvised.

In the process of throwing away the safety net, Eskelin opens his music to the influences of his new partners. The heavy bass-drum groove of "More Than That" hints at Ornette Coleman's Prime Time, but it's far less regular and constantly shifts foundations. As the piece develops, Eskelin's playing seems to connect the dots, working through measured, oblique phrases that accent rather than accentuate the pulse. His duet with Constable on "Tell Me When" matches their slightly craggy timbres in an abstract lyrical counterpoint. Constable's vibrato-rich delivery plays out in interesting ways against Eskein's floating, understated commentary. Both grasp for resolution, but it remains elusively out of reach.

The two tracks that feature the regular trio in isolation, "Anyone's Guess" and "Say It Again," stand in dramatic contrast. The former is a noisy, backbeat-driven opus (and it's a pleasure to hear Black ride roughshod over Parkins' insistent chordal energy), the latter a more amorphous exploration where time passes in gulps rather than readily discernable marked subdivisions. All six players appear on the longest two pieces, which are made more abstract and complex with the addition of the extra variables. Black's flexibility and adaptability is key to keeping the ball rolling through most of the higher-density performances, which retain due respect for each player's space.

Ten seems more like a detour than a new direction for Eskelin, to the extent it's unlikely you'll hear these configurations on record again. The freely improvised nature of the recording makes it all the more off the beaten path. It's to his credit that he continues to take risks like this, but I still prefer his regular trio work with Parkins and Black. Maybe it's the personalities involved, or the incredible amount of time they've spent working together, or the way they often maneuver as a unit within a compositional framework. Probably all three. Still, it's hard to complain about the top-caliber musicianship heard on Ten.

Visit Ellery Eskelin on the web and check out a recent AAJ review of his 2003 European Tour Diary .