By GLENN ASTARITA
September 11, 2017
Sign in to view read count 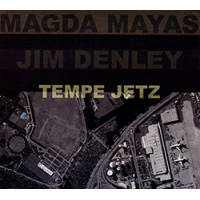 Magda Mayas (Germany) performs on a 1970s manufactured clavinet with reedman Jim Denley (Australia), augmented by their use of field recordings, as they pay homage to a "marginalized corner" of Sydney, Australia on this experimental and irrefutably adventurous improv fest. Yet I wouldn't be so bold to suggest that this is easy listening but for the most part, it's relatively subdued.

The duo projects organic minimalism amid the sounds of nature and bizarre tone poems that move forward in asymmetrical fashion. At times Mayas seems to be tinkering with the innards of her clavinet as Denley counterbalances and tints many of these fragmented motifs with otherworldly sounds, where the trajectories are either solemn, nervy, peaceful or droning. The field recordings are melded somewhere in between or in the background and not always easy to detect. Hence, the musicians execute a musical jigsaw puzzle of sorts but are apt to lull you into a groove.

It's largely a polytonal endeavor as the duo's creative forces impart a strange but captivating vernacular or dichotomy. On the final track "Arrival," the artists' hissing and plucking sounds emit a sense of isolation, peppered by Mayas' dainty clavinet voicings and Denley's whirling bass flute lines along with various noise shaping activities that allude to a series of tribal thematic expositions. Nonetheless, it's a rather challenging program. Coupled with the detailed audio experience, Tempe Jetz tenders additional surprises on successive listens.