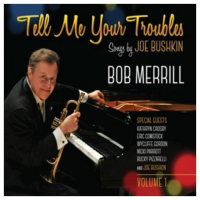 There are several arcs of history and experience intersecting on Bob Merrill's Tell Me Your Troubles—Songs by Joe Bushkin, Volume 1. The first is that of Joe Bushkin (1961—2004). Bushkin was a swing era pianist and composer best known for his association with trumpeter Bunny Berigan's band, guitarist Eddie Condon, Max Kaminsky, Joe Marsala, and Muggsy Spanier before World War II and Louis Armstrong, Bud Freeman, and Benny Goodman after the war. His style of composing, as evidenced on his son-in-law Bob Merrill's opening homage to him, is decidedly swing era with forays backwards into traditional jazz. It is quaint and historic. It is also vital and necessary. One does not know where they are going without an appreciation from where they came.

Bob Merrill's previous recording, Cheerin' Up The Universe (Accurate Records, 2015) might have had about the hokiest title, but its heart was clear: the dissemination of infectious music intent on raising smiles and causing heads to nod and feet to tap. Merrill comes across as a better-behaved Jack Sheldon with a more wholesome message. And there is a place for this. Merrill's sunny disposition shines bright on the present recording, reflecting his admiration for his father-in-law enough to devote multiple recordings to him. Was Bushkin the greatest performer? No, but that is not the point. Bushkin came to work and did his job and that was to compose music and perform it for entertainment and Tell Me Your Troubles is anything but short on entertainment.

Merrill lovingly puts together nine pieces either composed by, or associated with, Bushkin and is not stingy with his sharing the music. Merrill sings and trumpets on Bushkin's best known piece, "Oh Look at Me Now." He firmly establishes himself as the leader and curator of this collection of music, while allowing the likes of Kathryn Crosby and Wycliffe Gordon to sing these treasured songs. Crosby upends "There'll Be a Hot Time in the Town of Berlin," while Gordon gives his Satchmo best on "Boogie Woogie Blue Plate. That Harry Allen and Jay Leonhart are on hand is all gravy. This is as happy a recording as Cheerin' Up The Universe with a big heart an bow to the artist who was Joe Bushkin