Henry Darragh: Tell Her For Me

By BRUCE LINDSAY
November 22, 2009
Sign in to view read count 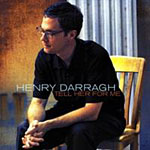 On Tell Her For Me, his first album, Texan Henry Darragh sets out of his stall as a fresh and original performer and writer. This is one of the most interesting and refreshing releases of 2009—a collection of standards and self-penned songs which is by turns funny, affecting and even educational.

Darragh's fellow musicians provide sterling support and Darragh clearly has talent as a pianist and trombonist—he contributes a rough-edged and driving trombone solo to "Early," for example—but it's his vocals that really mark him out. Jazz fans who demand technique and vocal power from their singers will need to look elsewhere. Darragh's style is gentle, introspective and seemingly untutored—but it's also warm, honest and emotionally engaging.

The obvious reference point for this vocal style is Chet Baker. The singers share similar approaches to phrasing, but Darragh's voice has a lighter, happier, tone than Baker's—most noticeably on De Sylva and Kern's "Look for the Silver Lining," which Baker has also recorded—even when singing of lost or unrequited love.

A more apposite comparison might well be with a young Loudon Wainwright III, especially on Darragh's own compositions. "Dream Boxes" is especially reminiscent of Wainwright, in terms of both the vocal style and the lyrics, which are naive and touching. Musically it's one of the strongest songs here, featuring some beautifully restrained and sympathetic playing from Darragh, guitarist Erin Wright and drummer Chuck Payne.

Of the other Darragh originals "Missing You" lacks structure but features an especially emotive vocal. "Regret" tells of a missed romantic opportunity—"what would happen if I had just asked her her name," sings Darragh—and features some fine saxophone from Seth Paynter. Closing track "The Harvard Dictionary of Music Song" is one of the finest tributes to the fourth edition of a musical reference book to be recorded in some time—strong on factual information about a dictionary which can make "your wildest dreams...come true." It's a short and funny song that brings this delightful album to a suitably joyful close.

Hey There; Regret; Everything Happens to Me; Once in a While; Early; Dream Boxes; Missing You; Tell Her for Me; Wrong Ending; Look for the Silver Lining; The Harvard Dictionary of Music Song.