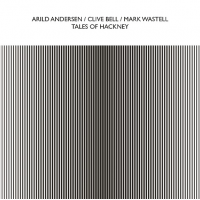 The renowned bass virtuoso Arild Andersen began his career playing in Jan Garbarek's group, appearing on Garbarek's debut album Til Vigdis (Norsk Jazzforbund, 1967) and a further four Garbarek albums up to and including Triptykon (ECM, 1973). His own quartet debut album was Clouds In My Head (ECM, 1975), representing the start of a long-lasting relationship with Manfred Eicher's label, which continues to this day.

The musician and composer Clive Bell has a special interest in East Asian wind instruments, several of which he employs here. Bell is the shakuhachi player on Karl Jenkins' album Requiem (EMI, 2005) and he has collaborated with Bill Laswell, David Sylvian and David Toop among others.

On this release Confront Recordings' founder Mark Wastell plays percussion and shruti box (a kind of Indian harmonium). Wastell has been an active protagonist on the British improvisation scene for well over two decades and he first appeared on a recording with violinist Philipp Wachsmann (FMR, 1995). Although better known for his work on cello, the multi-instrumentalist is perhaps guided by Sun Ra's dictum that "As all Marines are riflemen, all members of the Arkestra are percussionists."

The set opens with "I," Andersen leading with a sinewy pizzicato bass line, closely followed by Mark Wastell on low-key percussion and Clive Bell evincing a sprightly repeated motif played on khene (a Thai mouth organ). The khene takes on an almost bluesy feel on "II," surrounded by sheets of delicately beaten cymbal and resonant bass. "III" sees Bell move to flute with Wastell's bowed-cymbal accompaniment. "IV" evokes a sense of eeriness, Bell's flute fluttering over the underlying forbidding soundscape whilst there's a near-electronica feel to "V." But the uniformly delicate approach to "VI" is starkly juxtaposed with the more threatening drones of "VII." On "VIII" Andersen performs some truly virtuosic rapid-fire runs, yielding a virtual masterclass in bass.

With the notable exception of Andersen's stentorian extemporisations, the surprise here is that the music is frequently much nearer to ambient than improvised jazz. However, it's also clear that the music is collectively improvised apart from track IX's inclusion of the limpid "Mira" composed by Andersen, which appeared on his album of the same name (ECM, 2014). Taken as a whole suite, the music proves a mesmerically captivating performance.