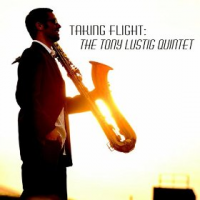 With this sterling date, up-and-comer Tony Lustig ascends to his rightful place in the pantheon of baritone saxophonists operating today. He brings together a crack crew and delivers eight originals that simultaneously dare and delight.

This music marks Lustig as a centrist, but one who's willing to take some risks and push at the boundary lines of conformity. It's the perfect blend of comfort and challenge, feeding the soul and firing the imagination all at once. And in the center of it all is Lustig's lusty horn, inviting all to come and enter into his world.

The album openers—the back-to-back combination of "Change Is Comin'" and "Fraytown"—paint Lustig as a soulful spirit. They're both pulpit-to-the-people presentations, but each speaks to a different aspect of Sunday morning sermonizing. "Change Is Comin'"—a bright-eyed, Horace Silver-worthy number—is all ardor and joy. Lustig and trombonist Michael Dease each give a quick nod to Duke Ellington's "I'm Beginning To See The Light" in their respective solos, and all parties praise the virtues of swing throughout. "Fraytown" is a different side of the same coin, a breezier vehicle in three that proves to be the perfect companion piece to what precedes it.

Lustig sets his course with those first two numbers, but he changes it with "Prometheus." He abandons Sunday morning in favor of Saturday night, delivering a charged modern jazz number that speaks to the attitude and edge of the New York scene. It's the first sharp turn in the program, but it's not the last. He follows that up with a series of dissimilar numbers that sit well together. "For Wayne" is an open world, balancing the pensive and profound in a reduced-gravity atmosphere; the title track—a tuneful number in five—is both alluring and probing in its unfolding; "Serving It Up" is a slick slice of funk that would've been right at home in the late Cannonball Adderley's book; and "On The Wings Of Icarus" is a waltz with plenty of highs and lows, flying close to the sun and down toward the water at different times. After that, all that remains is a perfectly placed, bluesy bon voyage in the form of "Burnin' Grease." It's a fun farewell that sends the listener off with a smile.

While skillfully wrought material is often built at the expense of soloing, and blowing dates are often built around meaningless husks masquerading as songs, Lustig has managed to avoid those pitfalls while wedding the best aspects from both types of productions. He writes smart and memorable tunes that leave ample space for soloists, highlighting his skill with the pen while giving himself and his talented teammates—Dease, pianist Samora Pinderhuges, bassist Ben Williams, and drummer Ulysses Owens, Jr.—space to shine. He clearly took that need for that balance into account here, and it's a good part of the reason why Taking Flight is such a good listen.

Change Is Comin;; Fraytown; Prometheus; For Wayne; Taking Flight; Serving It Up; On The Wings Of Icarus; Burnin' Grease.