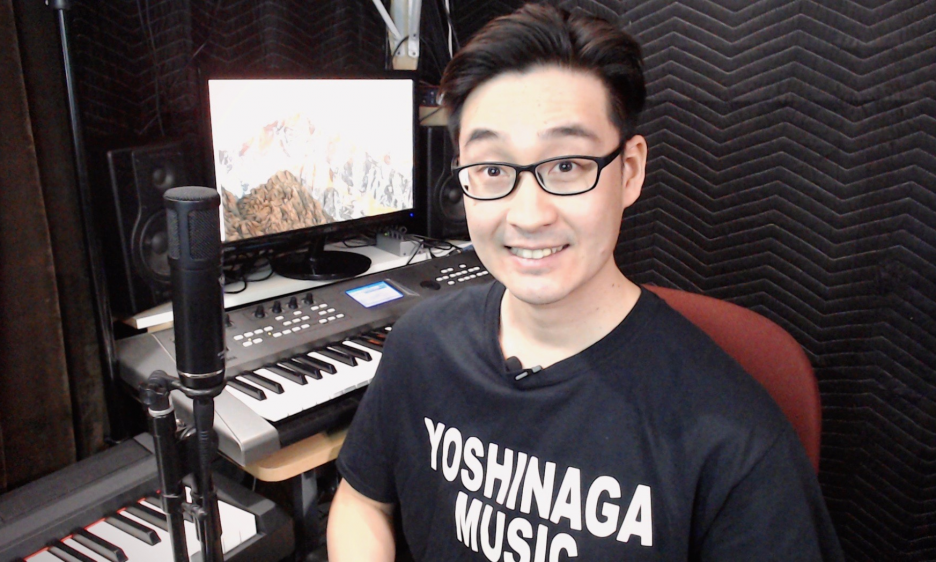 By TAT YOSHINAGA
February 28, 2018
Sign in to view read count
About Tatsuya Yoshinaga

Tatsuya "Tat" Yoshinaga is an award-winning, multi-instrumentalist currently residing in the U.S. Tat, who is originally from Japan, came to Boston to attend the prestigious Berklee College of Music. After much success as a performer and teacher, he now calls Boston his home. He plays and teaches piano, keys, guitar, ukulele, bass, drums, percussion, etc. As a member of the American Federation of Musicians/Boston Musicians' Association, he enjoys collaborating with the world-class musicians in this organization. He has been recognized as a spectacular drummer, and is a recipient of the prestigious Zildjian Award, in addition to several music scholarships. His XTY Jazz Group "X, Tatsuya Yoshinaga" was acclaimed by jazz agencies and started performing at some of the first-class venues including Ryles Jazz Club and Les Zygomates. His charitable work includes a performance at the House of Blues for "Friends of Boston's Homeless" where they raised $150,000.

I first started playing the piano when I was a young boy, then I gradually began to learn the organ, keyboard, drums, guitar, bass, violin, saxophone and so on. I studied a lot of drums and percussion while learning the piano and bass guitar at Berklee College of Music. I love playing whatever instruments I play, but keeping up chops on all of those instruments is always a challenge.

"On time is late. Early is on time." Many students didn't like this teacher who plays in Boston Pops while I was loving him at Berklee. Now, I realize everyone who is involved in the music business, has to repeat this motto with me frequently, "On time is late. Early is on time." But, a little more musical point... Berklee College of Music was my big influence -free advertisement for Berklee. (laughing) People from all over the world come to this one place to study music which is amazing. I can't list all my teachers here—as it's hundreds. But I have been influenced by pretty much every single teacher and students. When we master the music field, we need more ideas from other fields, like getting composition ideas from nature or lyrics from the news or stories.

Somewhere I was teenage when I started performing on stage, I wished there was a way to make living like this. Before that, I wanted to become a baseball player.

My sound...it's original. In my opinion, music is a universal language. It is not functional as standard languages, but when we improvise between musicians, we are communicating in music!

..."Have your goals!" Learning music without a goal or purpose can be a waste of time, except if you just want to have fun sometimes like a hobby. In my opinion, all the music students should know why they are learning music and for what. It can be a very simple reason like, I want to be an American idol, and win the America's got talent, etc. I have seen that students who have clear goals have made much more improvements than students who don't know what they want to do in the future. "Every student is different!" Some students are really good at reading notes and some are really good at learning by ear. Some students have bigger hands and some have smaller hands, so I think it's very important to find the strength and weakness of each student and grow based on what they want to be.

XTY Power Band! This unique project requires a bigger investment to audition musicians and singers who play many instruments like myself and be able to switch between different instruments on stage. The idea came up years ago and this is still in progress!

I was setting up the drums for the background music performance with my jazz group at one of the famous hotels and realized the hi-hat shift bar was missing and there was no time left prior to the show! The part was really necessary to keep up the beats with foot. I broke my pianist's music stand to use as the replacement but didn't work and here the time comes... I played with a BIG smile, and kept moving legs to make it look like everything was fine. After the show, we received many compliments and got the next gig date. But I was extremely unhappy with the fact, and thought about if that happened at a jazz venue where critics were watching my hi-hat work. After this experience, I ALWAYS setup a full drum-set before going anywhere, and it's been working pretty well.

House of Blues in Boston! I performed there for the Friends of Boston's Homeless event and we raised $150,000 dollars. It was a huge crowd and the waiting rooms were so fancy. Some of Boston's best restaurants sponsored the food and drinks. We were fed so well!

Perhaps, Happy Birthday by Tat Yoshinaga! I currently have a rock version of this song but jazz version is coming soon... It's so much fun to celebrate people's birthdays through my birthday songs! By the way, you can find me on iTunes, Spotify, and Youtube #TatTheMusician!

I am Japanese! That means I speak Japanese, and of course, love sushi! People call me Tat (Tat-suya) and I speak English so some people really don't know I am a Japanese. Another secret, my brother is a very famous composer/arranger/producer in Japan. He just uses an artist name and no one knows he is my actual brother. Someday, I will be on the Japanese TV show with my brother and introduce each other. (Laughing)

Not sure what was the first jazz album but I do remember the first album I bought. It was Whitney Houston! When I was 10 years old, I loved one of her albums and walked into a store. The album had a cover photo that Whitney was wearing a swimming suit and I thought the album included some "adult content" and went back home. Moments later, I came back to the store with my friend and finally bought the album with friend's help. That was a funny story! Whitney sings a lot of pop but herself and backup musicians really know about jazz. Whitney's keyboardist Jetro Da Silva helped me to find the right piano courses to take while I was at Berklee College of Music.

LIVE Jazz! But I'm talking about "unique" live jazz. Techniques are great but not everything. Also, schools, especially non-music schools need to hire more musicians and bands to perform live jazz for students.

Tomorrow, I pay my bills. (Laughing) Yes, it's true! Now is the peak of my life that my jazz group is performing at Boston's hottest venues, plus releasing many singles! Then, my first album. Yeah!

Well, it's usually before the performances like checking if we have all the equipment in the vehicle -especially when the venue is hours away! Losing a power cable or a part of the instrument can cause a MAJOR issue. If we are lucky enough, local stores barely have substitute items but if that's not the case, we are about to lose the job. Also, vehicles are legs for traveling musicians and sometime the vehicles can break down on the road -especially from the cold weather in New England! Once we setup everything and finish the soundcheck... We have fun!

I would be a baseball player! I have always loved the sport!

What is your hobby other than music?

Swimming! It's actually really good to keep it healthy. Also, I sometimes get musical ideas while I'm under the water.