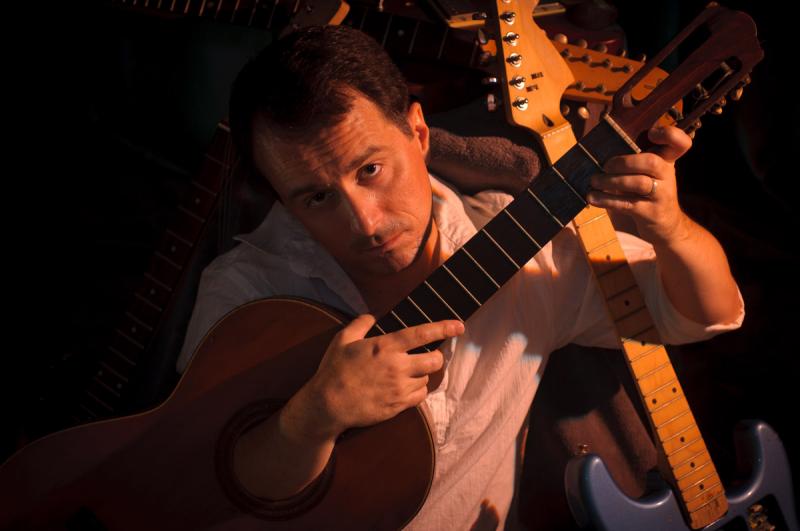 By DAVE FABRIS
August 27, 2014
Sign in to view read count
Meet Dave Fabris:
The music of guitarist David Fabris has been steeped deeply in an eclectic pool of influences... His new CD, Lettuce Prey (Great Winds/Musea), is music that has the guts and glory of rock, the surprise and intrigue of jazz and the intricacy and depth of contemporary classical music.

His diverse influences are also evident in the variety of performances and ensembles to his credit: He has recorded four albums (Hatology, Soulnote, NoBusiness) and toured internationally with his mentor, third stream pianist Ran Blake, to great acclaim. Blake joins "The Knife" as a featured guest on Lettuce Prey.

Fabris has performed (on banjo) with his traditional jazz band, Mudsole, for both of President Clinton's inaugurals. He was a reserve guitarist for Bernie Worrell, a founder of the seminal funk band Parliament. He is currently a member of the experimental big band, the Pittsburgh Collective, and the Punk/Cabaret trio, IMPetus.

Mr. Fabris is also the founder of the Fabulous School of Music in Beverly MA and an adjunct professor at St. Thomas Aquinas and Passaic County Community College.

I knew I wanted to be a musician when...
I had that first cathartic jam session as a teen where the communication and creativity meshed so well that I have been on a quest to recapture the rapture all my life.

Your sound and approach to music:
It has to have passion, guts, some recklessness, and humor. Too much jazz is mired down by an intellectual approach which doesn't speak to a non-musician audience. George Russell told my class that we were the oldest bunch of young people he'd ever met and pleaded with us to have some passion in our music that stuck with me.

Your teaching approach:
I enjoy finding out how each student thinks. I then craft an individual lesson plan based on that person's taste, strengths, and weaknesses. I have no problems teaching beginners songs they want to learn to motivate them to practice. Then, while doing that, I can bring up technical devices in those songs (scales, new chords, etc.) rather than starting with technique.

Road story: Your best or worst experience:
Getting robbed at the Atocha Train Station in Madrid and having to fill out the police report in my very bad Spanish...

Favorite venue:
The SUF Festival in Santander Spain put us up in a hotel one block from a beautiful beach, brought the musicians on guided tour of the region and, of course, the food was spectacular!

Your favorite recording in your discography and why?
Lettuce Prey, my latest CD, is a long-time labor of love. I began recording this in the late 90's with the idea that it would be a collection of arrangements of contemporary classical music with a rock style instrumentation. It features some of the best musicians I had been working with to that point. It's nice to finally have this music be heard.

The first Jazz album I bought was:
American Garage by Pat Metheny

What do you think is the most important thing you are contributing musically?
DANGER

How would you describe the state of jazz today?
Improving -I like the direction Don Was has taken Blue Note with signing bands that use the vernacular of hip hop and modern elements while staying true to the history of improv and the jazz tradition. The masters were always striving to grow and we need to do the same.