For a good 15 years, Luca Sisera has been a sought-after bassist in the Swiss jazz and improvisation scene. Musically, he likes to operate in the charged environment between composition and improvisation. He is frequently seen on stage at various festivals and jazz clubs across Europe in over 100 concerts each year, whereby some tours and concerts have already taken him to Egypt, China, Jordan, Guatemala and America. To date, he has been involved in over 30 audio releases. Luca Sisera has also started working as a composer for his own quintet “Luca Sisera ROOFER”. As interdisciplinary projects have always interested him, Luca Sisera has also worked with authors, cabaret artists, dancers and visual artists, among others, as well as on theatre and film productions.

Dance In A Triangle 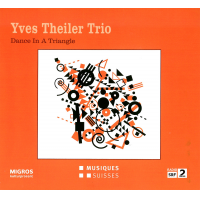 Label: Musiques Suisses
Released: 2016
Track listing: For Bass; Day By Day; Book Of Peace; Dance In A Triangle; In A Way It’s Nothing; Caravan Change; Over There Is Another One.

Although a piano trio has a leader, the better ones behave as an equilateral triangle. That is, they “go Dutch." In the case of the Yves Theiler Trio, we could say the music on Dance In A Triangle “goes Swiss." The pianist, Yves Theiler, composed all the music here, but it is improbable that ...

Out of the Box

Yves Theiler Trio: Out of the Box