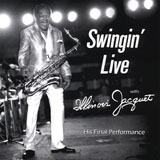 Bandleader Illinois Jacquet suffered a heart attack and passed away at age 81, just six days after this ninety-minute, July 16th, 2004 plaza concert at Lincoln Center's Midsummer Night Swing. It was his favorite engagement, his band's seventeenth appearance for the series. The previous May, the Juilliard School had awarded him an Honorary Doctorate of Music degree and The Illinois Jacquet Scholarship in Jazz Studies has since been established to honor the memory of the saxophonist. This two-CD set captures the live excitement that surrounded Jacquet's big band and the musical swing that had driven him from the very beginning.

Jacquet, whose father led a big band in the deep South, started out with Milt Larkin's Orchestra in Texas, playing swing when it was just coming of age. He soon graduated to the bands of Lionel Hampton, Cab Calloway and Count Basie, leaving his distinctive tenor saxophone imprint everywhere he went. Jacquet also sings several numbers for posterity and plays alto for "On the Sunny Side of the Street. Typical for a live recording, there are many distracting sounds that leave many of the solo spots hanging out to dry. Nevertheless, the spirit was there and Jacquet is represented well. His soulful tenor impresses on "Flying Home as strongly as it did in 1942 with Hampton's Orchestra. "More Than You Know, "All the Things You Are, "Blues from Louisiana and "Black Velvet are among the album's selections that feature him in his prime.

The concert includes outstanding solo work from several band members: tenor saxophonist Julius Tolentino on the band's extended arrangement of "Tickletoe ; alto saxophonist Vincent Lardear on "Doggin' Around ; and trumpeter Freddie Hendrix on "Night Train. The band's enjoyment is palpable and, as Jacquet closes the concert with a strong finish on "Flying Home, they soar alongside his powerful leadership and persuasive tenor.