By JACK BOWERS
October 3, 2007
Sign in to view read count 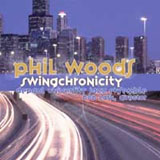 Nothing is perfect, so the saying goes, and thus it follows that one can, in theory, always find something to disparage or take issue with in any work of art or piece of music. While that may be true, on a scale of one to ten, Swingchronicity warrants at least an eleven. This is, after all, Phil Woods, one of the world's greatest living jazz musicians, weaving his incomparable magic in a breathtaking concert performance at Chicago's Jazz Showcase with one of the country's most honored undergraduate groups, the DePaul University Jazz Ensemble, a tasteful and dynamic recital that is not only remarkably well-played but wonderfully recorded as well.

Indeed, once one brushes aside the album's rather ungainly title, there's really nothing left to quibble about. Woods is superb, as usual, while the DePaul ensemble plays with uncommon awareness and backbone, reinforcing with every phrase its admirable reputation among college-level bands. A further round of applause should be reserved for engineer Thomas Miller, Dan Steinman and ensemble director Bob Lark for the exemplary recording, mixing and mastering. Concert performances seldom sound as clean and well-balanced as this.

Woods solos brilliantly on the first seven numbers, and then steps aside to let the students have their say. The buoyant opener, "I'm Getting Sentimental Over You, is the first of three blue-chip charts by DePaul faculty member Tom Matta (the others are Sammy Cahn/Jule Styne's "It's You or No One and Benny Golson's "Along Came Betty ). Matta also wrote and arranged the muscular finale, "Recessions. Woods bestows further alto lessons on the graceful ballad "Never Let Me Go, Jim McNeely's lavish "Rosenwind, and a pair of emblematic jazz evergreens by Quincy Jones, "The Quintessence and "Stockholm Sweetnin'. Besides directing the ensemble, Lark (flugelhorn) duels with Woods on "It's You or No One, and there are likable solos along the way by trumpeter Dan Jones, tenor Anthony Bruno, vibraphonist Justin Thomas, guitarist Scott Hesse and pianist Ben Dockery.

If the last three tracks are a wee step removed from the others, that's only because Woods is taking a well-earned breather. Another talented alto saxophonist, Lena Lien, wrote (and solos impressively with trumpeter Justin Surdyn on) the lyrical "Norwegian Summer, while McNeely composed the playful "Skittish (with frisky ad libs courtesy of Dockery, Hesse and bassist Cory Biggerstaff). Alto Nick Mazzarella and drummer Lawrence Haskin burn rubber on "Recessions.

Even without Woods, this would be an above-average concert date by an outstanding college-level ensemble, thanks in part to the terrific charts, impeccable choice of material and superior recorded sound. But one needn't consider that, as Woods' amazing alto is an indispensable ingredient in the recipe, and his consummate artistry places Synchronicity in a class of its own and makes it a must-have album for big-band enthusiasts.