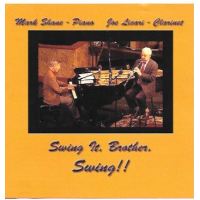 The title of the album is Swing It, Brother, Swing!! but it could just as well have been tagged After Hours. Not that this small gem of an album, rooted in the sensibility and protocols of the swing era (and in certain of that period's antecedents) isn't a model of forward propulsion. Indeed, in both its slow and middle tempo numbers, it swings mightily. But the alternate tile speaks to the music's intimate, late night mood it immediately evokes.

What we have here are two gifted artists with a long professional association, subtly functioning as extensions of one another. And while they are obviously making music for themselves, for the sheer joy of it, they never lose, as the structure and cohesion of their interplay and individual flights makes clear, their awareness that they also have an audience to please.

Clarinetist Joe Licari's "unfailing exuberance, his touch with a ballad and the marvelous symmetry of his solos," have been written about before, in response to his decade or more of playing, mostly at Arthur's Tavern in Greenwich Village on Monday nights. He possesses a remarkable command of all of his instrument's registers and has taken the evident inspiration from Benny Goodman. Week to week, he continues to try different approaches and to continue to grow, into his eighth decade at this point in time.

As for the estimable pianist Mark Shane, we can cite a quote from Marianne Mangan's excellent liner notes. ..."after an early brush with modernism, [Shane] heard the likes of James P. Johnson and Fats Waller and never looked back. With Teddy Wilson, Count Basie and Art Tatum influences in the mix, he developed an all-star resume as a stride virtuoso himself, a masterful ensemble and solo jazz pianist." It can be noted also how expertly Shane uses his left hand to compensate for the absence of a bassist.

Wisely chosen to optimally reflect the unique talents of their interpreters, the sixteen tunes in this rich and varied collection, ranging from the ever-appealing "Sugar" to the Sidney Bechet classic, "Si Tu Vois Ma Mere" include many outstanding if lesser known jazz standards as well. Virtually every track invites and will reward repeated hearings.

Sugar; Please, Waitin' for Katie; Delta Bound; There's a Cabin in the Pines; Drop Me Off in Harlem; Sweet and Slow; Evenin'; Deep Night; You Were Only Passing Time with Me; Pee Wee's Blues; That Rhythm Man; Baby; A Melody from the Sky; Did I Remember?; Si Tu Vois Ma Mere.