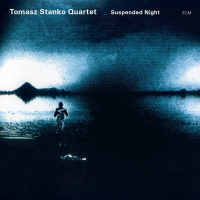 It won't come as a surprise to listeners attuned to trumpeter Tomasz Stanko's personal style, but Suspended Night is an incredibly soft and gentle record. Of course, the danger with toning things down is that they sometimes expire, but Stanko knows how to move along simply without running out of gas. The sheer elegance of the disc, recorded last July in Oslo, ends up a tour-de-force of the highest order.

Some listeners may equate the contained, measured tone of this record with the so-called "ECM sound," and if your ears find that stereotype distasteful then you're best advised to look elsewhere for listening pleasure. It's more "be" than "bop," that's for sure.

Following the lyrical opener "Song For Sarah," the rest of the disc comes in the form of ten "Suspended Variations." That's obviously meant to reinforce the idea that the music was intended as a suite, which is just as well given the material involved. Stanko personally composed all tracks except two variations by his quartet, which includes fellow Poles Marcin Wasilewski (piano), Slawomir Kurkiewicz (bass), and Michal Miskiewicz (drums).

"Suspended Variation I" has a bit of a Miles Davis feel—and I'm sure Stanko's had more than enough of such comparisons—both in terms of the trumpeter's tone, which is rounded and soft, and the ensemble dynamics, which resemble a calmed-down version of Davis's mid-'60s quintet. The surprise here is drummer Michal Miskiewicz, who often prefers to color instead of keep time, and he's largely responsible for the feeling of extended time.

Of the pieces that follow, "II" is notable for its cyclical four-part progression, always moving forward with a hummable melody. "V" starts atop a bouncing bass vamp and a lightly swinging groove, evolving into back-and-forth abstraction, and returning home for a more steady feel. The gaps insterspersed here and there speak as loudy as the notes themselves. "IX" serves as a happy-handed break from the more serious (and often somber or melancholic) flavor of its predecessors. It rolls freely along, fueled by Wasilewski's melodic thrusts on the piano, when he's not sitting softly back to relax and let Stanko fly. "IX" offers extended lyrical phrases that twist, turn, and tumble upon each other, a sort of quiet storm of understatement.

The overall gentle feel of the recording is manifested repeatedly throughout, but at no point does the music get flabby. This is without question one of Stanko's finest efforts, a velvet-tipped arrow which lands in your ear but doesn't spill a drop of blood.