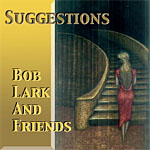 If you've not heard of trumpeter Bob Lark, that's probably because he spends much of his time supervising the admirable Jazz Studies program at Chicago's DePaul University. In his spare time, Lark often sits in with some of the Windy City's leading ensembles and has recorded three albums under his own name, including this consistently impressive studio session, his second for the Jazzed Media label.

Unlike In Her Eyes, his quintet date from a 2006, Lark isn't backed on Suggestions by the Phil Woods Quartet, but not to worry—the sidemen he has chosen are exemplary, starting with world-renowned pianist Jim McNeely and including three more of Chicago's finest: bassist Kelly Sill, drummer Joel Spencer and one of my favorite unsung tenor saxophonists, Mark Colby. Five enormously talented individuals who also play extremely well together, which alone is enough to ensure the success of almost any endeavor.

The quintet is present on six of the album's ten selections; the other four are duets showcasing Lark on flugelhorn, and McNeely. Their rapport and interplay is always tasteful and often breathtaking. Colby adds a lucid solo voice on the quintet tracks while Sill and Spencer provide a sturdy rhythmic bedrock. Lark has chosen four well-known standards, Jazz classics by Clifford Brown ("Joy Spring ), Thad Jones ("A Child Is Born ), and McNeely's "Gracie's Delight to complement three of his urbane compositions, the first of which, "Suggestions, leads off the session. While it's pretty good, I'd have set things in motion with "Joy Spring or one of the standards—either "Star Eyes or "You and the Night and the Music —but that's a minor rebuke.

What's important is that the music sings, as it does consistently, thanks to Lark's lyrical horns and the unwavering support of his congenial colleagues. For comparison's sake, Lark reminds me most of Tom Harrell, hardly a shabby role model, but with his own singular point of view. McNeely is a splendid soloist and sensitive accompanist, while Colby, an admirer (but not an imitator) of the late Stan Getz, is consistently resourceful and never less than engaging.

Having carefully measured the album, the suggestion from this listener is that you bend an ear to this Lark, as you're sure to appreciate his song.

Suggestions; You and the Night and the Music; Lover Man; Old School; Joy Spring; If You Only Knew; Gracie