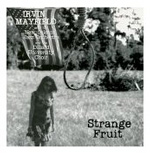 If there is any justice, Irvin Mayfield's powerful cantata that lays bare the taboo of interracial love and the horrors of lynching in the Jim Crow South should assume an honored place among the celebrated masterpieces of early 21st Century music. That probably won't happen, as justice is almost as scarce today as it was then, but it should. Strange Fruit is a monumental work, as celebratory as it is somber, a deeply emotional experience whose recitation of unpleasant truths is counterbalanced by the upbeat temper of Jazz, traditional and modern.

The cantata, which was commissioned by Dillard University in New Orleans, premiered at the school on October 19, 2003, using the combined forces of Mayfield's New Orleans Jazz Orchestra and the Dillard University Choir. Its title is taken from singer Billie Holiday's well-known lament from 1939, but the similarity ends there. To delineate Mayfield's vision, we turn to the excellent liner notes by Lucas Diaz:

Written in nine movements that are separated into triads, Strange Fruit combines big band orchestration with choral arrangement, lyric solos and narration to tell the fictional account of LeRoi and Mary Anne, an interracial couple who fall in love in 1920s Louisiana... The narration that precedes each movement is the actual story that is re-"told" through the music, so one hears the story twice, as it were; once through narrative and once again through music. The combination of the two enables Mayfield to provide flesh and bones to his orchestration, making the epic work accessible to the audience.

ADVERTISEMENT
To properly recount the story one needs a persuasive narrator, and Mayfield has one in Wendell Pierce, whose penultimate narration (#8), describing the hanging itself and the anguished supplication by LeRoi's preacher father, is especially heart-wrenching. In spite of that, the blues-drenched denouement is full of hope and optimism. As Pierce says, "There's healing power in the blues, yes it is. Orchestra and choir are splendidly combined, and Mayfield pulls no punches in weaving the quite believable story of LeRoi and Mary Anne's summer romance and the uncontrollable anger of her jealous suitor, Charles, who, on learning of Mary Anne's love for LeRoi, savagely beats her and immediately accuses LeRoi of rape, a charge the white townspeople are all too eager to believe, even in the face of Mary Anne's strenuous denials.

The outcome, of course, is almost pre-ordained. For overpassing the unspoken barrier between black and white, LeRoi must die. And so he does. But as the narrator points out, "people seemed to learn something from those days, especially Mary Anne. And so there is hope after all, as times and people change. Mayfield, the orchestra and chorus adeptly convey a tragic yet oddly inspiring parable, one that shines a bright light on one of the darkest periods in American history but argues that even in the depths of darkness and despair, there is cause for assurance.