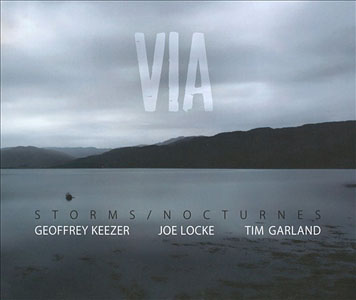 Virtuosity can, when it's the raison d'être, be an impediment; when it's a foundation, in service of the music, it can be liberating. Storms/Nocturnes was initially the brainchild of Tim Garland but, after first convening as a subset of the sextet on the closing track to the British saxophonist/composer's Made By Walking (Stretch, 2000), ultimately evolved into a more egalitarian working trio. Both Storms/Nocturnes (Sirocco, 2001) and Rising Tide (Sirocco, 2003) combined the kind of rigorous material only the most skilled players could compose and navigate, with the loose spontaneity and empathetic interaction that such stunning virtuosity can afford, while remaining especially rare and precious for a trio that was always an occasional venture by necessity—spread, as its members were, across great distances, with Garland in London, pianist Geoffrey Keezer in San Diego, and vibraphonist Joe Locke a dyed-in-the-wool New Yorker. It's been seven years since the trio last worked together, but you'd never know it on VIA, an album that celebrates the many locations Storms/Nocturnes has encountered, both at home and in the near-countless locales its players have visited on the road.

VIA does, however, represent a number of changes for the trio as well. First, while Keezer and Locke contributed material to the first two discs, this is the first album where compositional credits are split equally amongst the trio; it's also the first disc produced by Storms/Nocturnes, rather than Garland, in cooperation with John Priestley, the label head of the now-defunct Sirocco label. A lot has happened to everyone in the intervening years since Rising Tide, with plenty of the overdue accolades that had, for the most part, eluded them when they last came together. They're all much better-known and, more importantly, better respected—especially Locke, who has released a string of consistently fine records, including his other collaboration with Keezer, Live in Seattle (Origin, 2006), their powerhouse, near-fusion Joe Locke/Geoffrey Keezer Group recording. Garland, too, has released a series of adventurous recordings, culminating in Libra (Global Mix, 2009), where his ongoing work in dissolving stylistic boundaries hit a particularly successful peak.

In the liners to one of the most stunningly beautiful packages to come out in years (designed by Nadja von Massow), Keezer refers to "the perceived and over-hyped chasm between American and European Jazz," and VIA posits that this artificial abyss is only maintained by those who feel the need to constrain music inside clearly defined boxes. The pianist's "Daly Avenue" is, at its core, a blues, and swings hard during Locke's lithe solo, Keezer's left hand a visceral walking bass line, his right, a series of peppered chords that twist the blues' basic I-IV-V form into unexpected harmonic shapes; at times clearly driving the vibraphonist, elsewhere in instantaneous response. Garland's soprano solo, bop-centric as it is, still moves in, out and around the time, as Keezer mines the lower end of his piano, moving gradually towards the repitition of a theme that bridges any and all distances.

Garland focuses largely on soprano sax, but brings his bass clarinet to the knottily composed "Ripertoli," providing a guttural foundation during Keezer's flowing solo, as the pianist deftly weaves in and around the form, leading to an equally cursive soprano solo from Garland, soaring above support from both Keezer and Locke that's an architectural marvel—a pointillistic confluence that's all the more remarkable for its effortless avoidance of harmonic or rhythmic train wrecks.

Of the three, Locke has always been the most pathologically lyrical writer—sometimes writing words to songs that never get sung, but which drive the music nevertheless—a player whose heart is as stolen by the beauty of a simple line as it is more complex concerns. If VIA bridges a perceived American/European divide, it also draws a clear line between compositional detail and painstaking melodicism. The delicately descending changes to Locke's "Snowfall in Central Park" do, indeed, evoke the image of snowflakes falling on a strangely quiet Manhattan, but their being in an irregular meter in no way dilutes their natural rhythm, evidence that what goes on under the covers of such a richly composed piece are meant to remain just that. Closing VIA with Locke's "Miramar"—a tune with a completely different, more potent complexion on Live in Seattle—demonstrates just how far Storms/Nocturnes has come and that, sometimes, the passage of time makes a group stronger, not weaker, as its members bring everything they've acquired to the table, while still retaining their special collective voice, one born of effortless flexibility. Here, scored and spontaneous counterpoint ebb and flow beneath Locke's singable theme, leading to a vibraphone solo that marries Locke's allegiance to melody with unfailing virtuosity, never losing sight of the song's essence, or becomes an end unto itself. 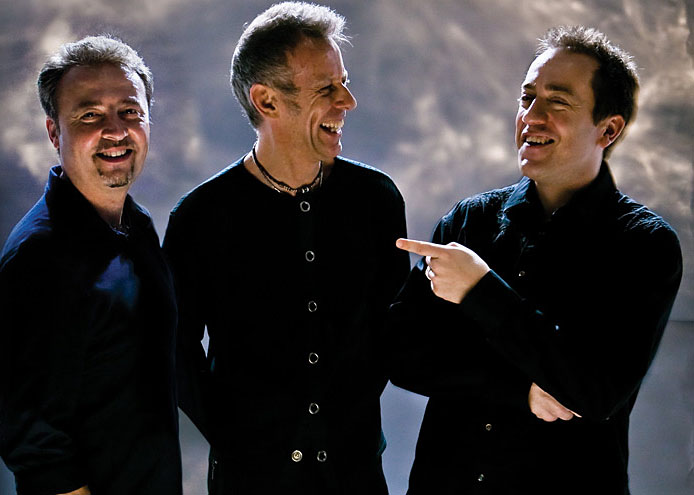 There's more evolution to hear on the balance of VIA's ten tracks, but perhaps the other significant difference about the disc is its availability. Sirocco's international exposure was always spotty, at best, but Seattle-based Origin Records has a far more successful track record at getting its music out to the world. VIA may be the first exposure, for many, to Storms/Nocturnes, but hopefully it won't be the last—nor, hopefully, will eight more years have to pass before another return to the studio by this remarkable confluence of form and freedom, never-superfluous or self-indulgent virtuosity, and uncanny, telepathic spontaneity. Perhaps, even, Garland, Keezer and Locke will consider a live album, to demonstrate just how this trio undoubtedly works off the energy of an audience.