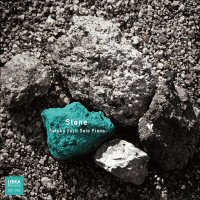 The turning of the calendar page to the year 2019 presented a dilemma for pianist/composer/bandleader Satoko Fujii: how to follow up her 2018 CD release-per-month marathon in celebration of her sixtieth birthday—called kanreki in Japan. Would she be tapped out or wearied after the frenetic release pace of the previous year? Or would the relentless creativity sharpen her sense of focus, give a boost to her idea of "what comes next?"

For Fujii, not surprisingly, it was the latter.

She opens the year 2019 the same way she opened her kanreki year, with a solo piano offering. But 2019's Stone couldn't sound more different from Solo (Libra Records, 2018), a straightforward outing that is one of her most accessible recordings, full of lyrical beauty and a mesmerizing elasticity of delivery and touch. Stone is another entity altogether, a sonic examination of the piano, the entire instrument—the strings, the metal frame that holds them, the wooden body—in an unfettered extended technique fest.

Fujii's stated reason for being is to create sounds/music that have never been heard before. She consistently achieves that goal, especially with Stone. Opening with "Obsius," Fujii manipulates her instrument to create a sound that seems a cross between distant thunder and a muted orchestral warm-up, with understated harp-like proclamations and spare statements on the piano keys. Then the thunder becomes a gentle roar of surf, pierced by prepared piano notes.

"Trachyte" opens with an eerie drone that sounds like a feedback malfunction of a guitar amplifier with, eventually, harpsichord-like (prepared piano strings) interjections that might elicit ruminations concerning exactly how Fujii creates these noises. Her "inside the piano" workings include wands and mallet-like tools, touches and frictions that set off washes of vibrations heretofore unknown, unheard.

And, as author Kurt Vonnegutt once said, "So it goes."

The entirety of Stone is an otherworldly stew of sounds. From dense, impending doom of "Lava," to the spacious, delicate piano notes tinkling out of an ear-stinging buzz on the opening of "Eternity," Fujii achieves her goal again, of making music no one has heard before.