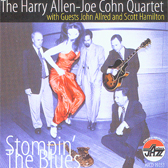 The Harry Allen-Joe Cohn Quartet has been a happily-going entity for over five years. At this point its easy interplay radiates a joyful and a profound understanding of decades of jazz. The musicians know what they're doing and have fun doing it. This latest collaboration mixes some of saxophonist Allen's own tunes with some beauties from the Great American Songbook, of which Allen, with more than 40 previous recordings to his credit, is a master (see the quartet's previous release, Guys and Dolls, for proof). Allen's tenor sax stylistic sound and beauty is thoroughly grounded in tenor giants from Lester Young to Stan Getz while his partner, guitarist Joe Cohn, has impeccable musicianship in the classic jazz guitar tradition.

"I'll Get By" offers a typical sense of the collaborative closeness between the pair. Allen is joined closely by John Allred's trombone for a long statement of the familiar melody. It's a sound that conjures up decades of couples dreamily making their way around the dance floor. Then Cohn comes in with a different timing and sound and though adding a variant rhythm is still in perfect sync with the others.

Allred and Allen have some seriously breakneck fun with "Don't Want To But Have To," one of four Allen originals on this set. And again there's Cohn adding his own special flavoring. Mention should be made of tenor sax giant Scott Hamilton's guest appearance, especially memorable on the melody and improvisation for "My Old Flame." A medley "It Might As Well Be Spring" and "Spring Is Here" is an opportunity for Allred to deliver a flight of fancy on the former while Allen's take on the melancholy of the second number is simply commanding. Accentuating their otherworldly sounds is the most delicate of brushwork by Chuck Riggs.

Track Listing: You're Driving Me Crazy; I'll Get By; Stompin' The Blues; My Old Flame; Don't Want To Have To; But I Will; I Only Have Eyes For You; I Would Do Anything For You; Medley: It Might As Well Be Spring/Spring Is Here; So There.