Gauci has developed a style heavy on multiphonics and manipulating overtones, in which he teeters between a liquid falsetto and a gruff bottom. In his phrasing he resembles an action painter attacking the canvas as the moment demands, rather than seeking to etch a continuous line. Typically, Shea, best known from his tenure with Mostly Other People Do The Killing, and Lane, who has a string of acclaimed leadership dates to his name, maintain a constantly fluctuating sonic undercurrent which allows Gauci to head in whatever direction he chooses. And they are responsive enough to follow him when needed.

These two albums documenting the outfit's activity are available as downloads. 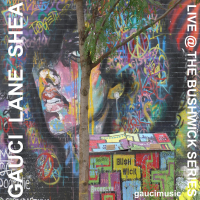 On Live At The Bushwick Series Gauci offers a further installment of his trio's unique take on free jazz from the basement of the Bushwick Public House, recorded in March 2019. The unit avoids tonal centers and regular beats in favor of astringent trilateral interplay which can seem disconnected were it not for the instances of explicit connection which surface during the performance, such as Shea's rattle to echo Gauci's stuttering motif early in "Improvisation #1."

Their dialogue is bursting with unexpected twists and turns, as Gauci slashes across or floats above the shifting momentum, then hangs back, then catches up. Shea lays down a carpet of percussive clatter which sounds as if sheet metal is a key component. Passages of density come balanced with airy tappy interludes which unlock space for Lane's intense, dexterous pizzicato throb to shine through. It's the bassist who tends to impart the forward thrust to the pieces. Whether on the urgent full-blooded starter or the more conversational "Improvisation #2," the outcome remains determinedly provocative. 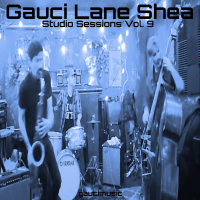 Convened just weeks before venues shuttered, Gauci intimates that Studio Sessions Vol. 9 might be the trio's swansong. If so, they go out on a high. While they sacrifice a little of the raw energy, the studio situation benefits everyone, especially Lane who is much better served by the sound, exposing the abundant nuance of his dark rumble. In fact Lane's careening sawing and abraded creaks dominate two of the longest tracks, while his shadowy underpinning makes for a winning contrast with Gauci's flights when he is so inclined.

Improved definition also reveals the detail of Shea's playing, encouraging appreciation of the slurred resonance appended to each of the series of drum strikes at the very end of "Improvisation #1" for example. Earlier during the choppy three way discourse his impulsive tumble, alongside Lane's stream of contrapuntal ideas, propels Gauci from nervy mutters to squealing forays into the stratosphere.

An egalitarian ethos pervades the six cuts which total just shy of an hour. The staccato "Improvisation #3," which at times suggests the leader's distant bop roots, proves one of the highlights. After tenor blasts and drum thrash, with Gauci's contorted howls set among fast middle register scribbles, the outing finishes as it began, in uncompromising fashion, which could apply as much to the group as to the album.