By EYAL HAREUVENI
October 11, 2012
Sign in to view read count 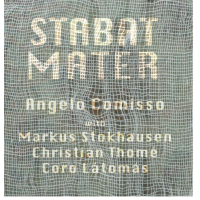 Italian composer/pianist Angelo Comisso took on a challenging task when he decided to write contemporary music to one of the most powerful medieval hymns, Stabat Mater Dolorosa, that meditates on the suffering of Mary, Jesus Christ's mother during his crucifixion, attributed to Franciscan Jacopone da Todi. This hymn has been set to music by many composers, among them Joseph Haydn, Domenico Scarlatti, Antonio Vivaldi and Arvo Part.

But Comisso arrangement of this sorrowful hymn does not attempt to correspond with already canonical, orchestrations of this hymn; instead, he transforms its religious experience into a contemporary setting and modern, chamber jazz. In his words, this composition is "a prayer for Mothers of the World, of every color and every religion." He chose for this project trusted partners for this project— trumpet player Markus Stockhausen and drummer Christian Thomè, the same trio that recorded before two fine albums—Lichtblick (Aktivraum, 2005) and Es war einmal ...instanti infiniti (Aktivraum, 2007)—and added an all-female chamber choir, the Venice based, 14 singers of Coro Femminile Da Camrera Látomás.

Comisso succeeds in creating a deeply reserved and intimate atmosphere throughout the composition's nine parts. The trio retains its confident, communicative and melodic interplay, and interacts with the choir beautifully, leaving enough space for solo vocal parts, instrumental solos and brief, gentle improvisations. This somber and patient atmosphere is so distant from everyday hustle or modern, urban jazz: innocent and sacred in its still relevant, lyrical message, but sober and secular in its imaginative contemporary arrangement; reflective with its powerful past images but immediate in its modern melodic tonal language; celestial in its solo vocal parts but deeply grounded in the trio segments. This inherent duality encourages contemplation on the power of music to enhance deep visions and sensations.