By GLENN ASTARITA
June 1, 2017
Sign in to view read count 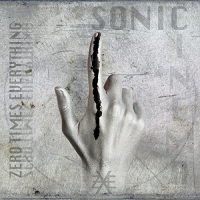 Multi-instrumentalist Richard Sylvarnes encapsulates the trio's approach by stating: "In film making it is critical to create a sense of space; a world wholly imaginary that we can enter completely and without reservation. That is the first critical step in the creative process of Zero Times Everything." Therefore, it must be asserted that the musicians have conclusively accomplished their mission on this immensely compelling album that bridges progressive rock with ambient-electronica, noise- shaping processes and a host of other musical tidbits woven into a comprehensive whole.

The trio use electronics and conventional instruments to paint a vivid soundstage that blends a highly emotive, and sometimes chilling aural backdrop for an imaginary film that summons a horde of mind-bending sound designs and much more. The respective artists have connected with King Crimson guitar legend Robert Fripp amid audiovisual performances while also aligning with new music pioneers, Laurie Anderson, John Zorn and others of note.

The band communicates a manifold program via surreal EFX, ominous guitar licks and a few bombastic torrents with meticulously arranged motifs that signal a catharsis of some sort. But it's accentuated with a clear-sighted purpose and game-plan. For example, "Accident" is a piece that broadcasts an emergency progressing at a slow tempo. Cycled by a gender-neutral computer voice with a refrain of "There's been an accident, you better call the police," imagery of a dour situation comes to fruition. Streamed with a doomsday-like backdrop of electronics, guitars, e-percussion patterns and sweeping choruses, guitarist Tony Geballe raises the stakes due to his soaring sustain-driven guitar lines along with droning treatments. Another fascinating piece is the band's bizarre spin on Crimson's classic "21st Century Schizoid Man," simply titled "Schizoid." Here, vocalist Sønje Sylvarnes stoically recites the lyrics in spoken word form, often sounding like an innocent teen, surrounded by loops, crunching guitar lines and a brooding wall of sound.

There are other tracks that feature field recording overlays, synth-based progressions and whispery prog rock style overtones. Hence, the album moniker closely parallels the musical imagery as the trio's cunningly crafted sound designs overturn most semblances of convention. It's more of an event with an embedded storyline that sustains a great deal of interest due to its magnetic qualities and substantial replay value. (Strongly recommended...)

And Now This; Events In A Field; LED; Accident; Natron 40; Ghost; Kapital; Vox Populi; Schizoid; (The Cathedral of All Saints).