James Austin, Jr: Songs in the Key of Wonder

By GEANNINE REID
December 12, 2018
Sign in to view read count 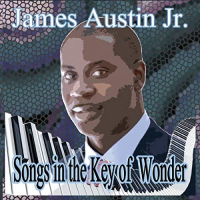 Hailing from the windy city of Chicago, James Austin, Jr has established himself as an accomplished pianist and bandleader. He honed his craft under the tutelage of a number of legendary musicians, including extensive study with renowned jazz educator Barry Harris, receiving numerous accolades and awards along the way, including the honor of being selected as a semi-finalist in the prestigious Thelonious Monk International Jazz Piano competition. Each year he has curated and led the New Jersey Performing Arts Center (NJPAC) Jazz Jam series since its inception.

All of these experiences have culminated into a debut offering that pays tribute to one of his longtime heroes, Stevie Wonder, titled Songs in the Key of Wonder. Austin has long considered Wonder as one of the greatest composers of our time. Others have covered Wonder's tunes on numerous occasions and for good reason, but Austin's arrangements focus deeply on the colorizations and appealing flavor of Wonder's mainstay hits.

Everyone knows the pitfalls that can befall any jazz artist when covering popular songs in the top-forty genre. Wonder's tunes have a sensibility about them that easily is lent to the jazz genre. Austin kicks the album off with Wonder's smash hit "Isn't She Lovely." Austin's version is taken at a mid-tempo pace with a deeply felt swing. Trumpeter Joe Magnarelli has a clear and focused sound on his solo while altoist Jarrard Harris puts to good use his succinct and musical solo. Austin' turn infuses the melody while invoking a solid rhythm within his lines. The band has a strong sense of swing, while also creating interest with band hits, while drummer Kobie Watkins lets loose. The melody is stated on the final form and the band settles back into a cooking yet melodic run, before more embellishments by the two horn players. There is something quite special about a band that can swing this masterfully. A Latin rendition of "Another Star," is taken at a mid-up tempo, and percussionist Samuel Torres is on fire on this tune. His rhythm is as solid as it comes, and Torres, bassist Ben Rubens and Watkins lock tightly. The song percolates, and once again Harris seamlessly creates interesting lines and builds his solos with motifs.

ADVERTISEMENT
The album ends with "Lately." Austin excels at ballads, which is not always easy for instrumentalists to master. His use of dynamics and colorization, under bassist David Williams, propels the tune, while Williams outlines the melody on bass on the first form. Austin's delicate touch on this song is emotive and heartfelt. It speaks to his ability to create a melodic, yet colorful texture to the tune. As the song progresses Austin skillfully builds the anticipation of the tune as his left hand deepens and his right hand continues to colorize with tenderness. The duet sound on the final tune is a soothing ending to an auspicious debut by this fine pianist.

Isn’t She Lovely; My Cherie Amour; Another Star; You’ve Got it Bad Girl; Part-Time Lover; Golden Lady; Overjoyed; You are the Sunshine of my Life; Tuesday Heartbreak; Lately.

Title: Songs in the Key of Wonder | Year Released: 2018 | Record Label: Self Produced