Radam Schwartz: Songs for the Soul

By EDWARD BLANCO
December 15, 2010
Sign in to view read count 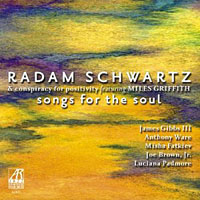 Hammond B3 organist/pianist Radam Schwartz has an impressive discography, appearing on over 35 albums of primarily instrumental music as both a sideman and leader. Songs for the Soul is a departure from past recordings in that it reveals his most extensive association with the vocal side of jazz to date. For this unique endeavor, Schwartz combines forces with New York vocalist Miles Griffith, along with background singers Kelsey Jillette, Cynthia Holiday, Gary Oleyar and Marcelino Feliciano. Providing the music is Schwartz's hand-picked light combo, known as Conspiracy for Positivity, which—along with Schwartz's organ sound—incorporates the instrumental voices of trumpet, alto saxophone, guitar and drums.

Drawing on elements of Gospel, funk and soul jazz, seven of the eleven pieces are driven by vocals of one kind or another, with the leader providing more of a supporting role, rather than being the center of attention. Griffith is the featured artist, and he is no ordinary singer. While completely comfortable voicing a beautiful ballad, as he does on the closing "My Soul At Peace," his unusually rough and assertive singing style can, at times, be a bit too aggressive—so much so that, on several songs, he screams, rather than sings, the lyrics. The opening "Get In At the Door" captures Griffith delivering a forceful vocal statement with some tasteful scatting, only to end in screaming fashion. Not all the vocals follow that template, however, as the Van Huesen standard, "Darn That Dream," features some of Schwartz's best soloing, between beautiful choruses sung by the background singers—and without Griffith.

While the vocal tracks take up the majority of the album, Schwartz does manage to include four dynamic instrumental pieces, beginning with his original "Curious Visitors" followed by a tender balladic interpretation of Van Morrison's classic, "Crazy Love." Alto saxophonist Anthony Ware and trumpeter James Gibbs III are especially pronounced here, delivering warm solos for one of the album's better moments. "Golden" and "Sky Namel" are the other instrumentals, both offering more solo space for the members of the band to showcase their talents.

Schwartz agreed to this concept album with the understanding that he would not sacrifice organ groove for vocalese. Whether or not he, indeed, achieved this goal is truly up to those who sample the disc to decide. Nevertheless, Songs for the Soul documents another dazzling performance from Schwartz, who takes the collaboration of organ and vocals to another level.

Track Listing: Get In At The Door; Darn That Dream; Sometimes It Is, Sometimes It Ain't; Curious Visitors; Crazy Love; All Blues; Youthology; Stay Away Blues; Golden; Sky Namel; My Soul At Peace.