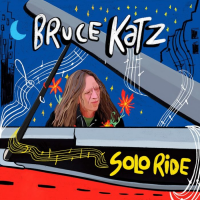 On Solo Ride, Bruce Katz posits himself as a stylist par excellence, curator of a perennial genre that deserves preservation in the musical landscape of America. And while it's something of a surprise to see him release a solo album, given the self-effacing demeanor he's displayed in his otherwise broad and varied collaborative experience (with Gregg Allman, Les Brers and his own groups), it is a logical touchpoint in the wide arc of his career.

Katz acquits himself with as much unabashed panache as pure technique on this all-instrumental endeavor. A dozen tracks of self-composed music comprise this tenth album under his name and while he may not be an altogether original composer—the opening "Down at the Barrelhouse" sounds like a composite of every ragtime boogie-woogie a casual listener might've heard—he imbues his piano playing with the genuine exuberance of a musician who relishes what he's doing. Likewise, "Crescent Crawl" is an enticement to listen more closely, if only to take note of the requisite self-restraint that comes with a player of this maturity.

Again, the source of the song is a bit too obvious (Huey 'Piano' Smith's "Rockin' Pneumonia and the Boogie Woogie Flu"), but the hint of that melody line is only one component of the tune and a rightful homage at that, rather than a transparent rewrite. The tease thus sets up the following number, Tampa Red's "It Hurts Me Too," and the placement of the solitary cover here injects logic into the track sequence without undermining the element of spontaneity: this 2019 Blues Music Award-winner is audible in his wordless singalong there.

In fact, his immersion in his performances is infectious far below the surface and readily discernible thanks to Ben Elliott's recording, mixing and mastering. Solo Ride boasts fulsome audio in which the sound up and down the ivories spans the stereo spectrum. As on the gospel-influenced "Praise House," the relaxed coordination of Katz' left and right hands is an object lesson in the integration of melody and rhythm and while "Red Sneaker" may sound somewhat too similar in style, it's juxtaposition with the prior number ultimately comprises an illustration of roots; co-producers Bruce Katz and Legare Robertson deserve special kudos for maintaining that element as one of the underlying themes of this record.

In an effective contrast, a pop-oriented romanticism runs through "The Way to Your Heart" and thus mitigates the partially-repetitive ambiance that arises by the homestretch of this approximately forty-five minutes album. Nevertheless, the overall consistency of this record, combined with the its overt familiarity, renders it readily-accessible (and should insure its durability). Whether soundtrack to a party or fodder for personal listening (headphones or not), the multiple attractions of Solo Ride are indicative of just what a labor of love it is.

Down At the Barrelhouse; Crescent Crawl; It Hurts Me Too; Praise House; Red Sneakers; Dreams of Yesterday; Midnight Plans; Easy Living; Going Places; The Way to Your Heart; Watermelon Thump; Redemption.