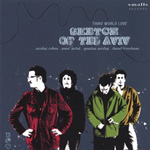 A celebration of life flows through Sketch of Tel Aviv. Third World Love, based in New York, is a quartet of three Israeli-born players (trumpeter Avishai Cohen, bassist Omer Avital, pianist Yonatan Avishai) and a New York native, drummer Daniel Freedman. Since their debut, Third World Love Songs (Fresh Sound World Jazz, 2002), their music has been labeled world fusion, embracing ideas from the Middle East, Africa and American jazz. Each musician is active as either a leader of his own band or a sideman in various music endeavors. But together as Third World Love, they have created something special.

What's convincing is not just their high level of playing, but also how they pull many global flavors together. For instance, on "A Touch of Tahini, you not only hear a Jewish influence, but also a hot Latin clave. In the title piece, "Sketch of Tel Aviv, there are swatches of Jewish, European and even American ragtime—further enhanced by a synthesized trumpet solo and a sweet, funky backbeat. That may sound wild, but it works wonderfully to yield music that is both accessible and familiar, regardless of your musical background.

The melody-filled compositions are supported by repeating phrases, interspersed with atypical jazz solos. One interesting piece is the rural-esque "Hareshut, boasting mesmerizing oud playing by Omer Avital. On the ballad "Suzanna, Cohen's synthesized trumpet evokes an affecting mood. One of my favorite pieces is "Suite African #2, which beckons the listener to dance with its steady bass/drum beat and playful trumpet/piano exchanges.

Third World Love draws inspiration from many sources, channeling them into its own sound. It is said that the band is wildly popular in Israel, performing in small venues or large arenas to enthusiastic crowds. Listening to Sketch of Tel Aviv, it's easy to understand why.