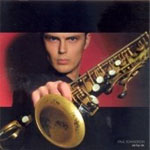 The disc's supporting members seem to share in the leader's aggressive leanings. Drummer Alyn Cosker is an Elvin Jones-inspired hurricane behind the kit. His bombastic accompaniment on "Earth Scene (Part 1)," and powerful samba-to-swing groove on "Dr Jones Will Never Believe This" pushes otherwise ordinary writing into the realm of inspiration. Bassist Michael Janisch plays the role of tireless work-horse with glorious sound and intonation. His crisp arco work on "Protective Memory" is a lyrical high-point of the session. Pianist Steve Hamilton comps with sensitivity and conviction. Tenor saxophonist Konrad Wiszniewski and trumpeter Tom MacNiven, both dynamic soloists, are given plenty of opportunities to stretch out.

Six by Six contains moments of musicality that are utterly thrilling. Towndrow proves himself a performer of immense talent, and if you can get past his absurd menacing scowl on the front cover you'll discover some very energetic jazz performed by a boisterous ensemble.