By STEPHEN HORNBY
April 1, 2015
Sign in to view read count 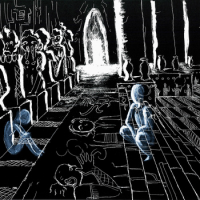 We live in a world in which anyone who has a laptop has access to an almost infinite array of sonic possibilities and can draw inspiration from any corner of the earth or pocket in time. This kind of freedom can be creatively paralysing for some while others may respond by narrowing their gaze. Marcos Eduardo Villalta's music however, reveals to us an artist who has the rare capacity to utilise all that is at his disposal in a creative and honest manner. The result of which is an album that is inescapably linked to our particular moment in time.

Villalta's 2013 solo debut, Pregdalia, introduced us to his musical domain; playful and often highly successful experimentations into synth-driven electronic music alongside virtuosic solo guitar playing framed within his idiosyncratic compositional aesthetic. Through the amalgamation of these two previously distinct worlds Villalta exhibits an even more highly evolved and personal voice on his follow up album.

Whilst Villalta flaunts almost every conventional notion pertaining to style or song form, his music is far from devoid of historical context. Rather, it is the synthesis and extension of many varied musical traditions. Although Villalta might find himself being herded under the banner of 'avant-garde electronic producer,' his work bears little resemblance to that of other musicians within his chosen medium. Instead his influences are drawn from far further afield and appropriated in a way that renders them almost unrecognisable. Villalta offers his unique perspective on: up-tempo swing ("Click On The URL"), beat box/ rapping ("Can I Meet Your Sister"), Merengue ("Diana, Deliver This Baby") and Prog-rock ("Marvin Town") amongst many others in this melting pot of musical influence. His strangely beautiful melodies, characterised by his distinctive approach to articulation and ornamentation, are reminiscent of Indian classical music. In his hands, his acoustically mic'd hollow body guitar sounds like a six-string sitar.

The mood of the album ranges from the inviting opener "Leaving your body" to the menacing, phantasmic "Stars and Things" to the intricate, labour-inducing "Diana, Quick Deliver this Baby." The lyrics cover an equally large spectrum from absurdist stream of consciousness "Sir. TMTOIYIOXOIYIOTMT's Elephant" to the schizophrenic conversation with the "Wise One" to the down right hilarious "Can I Meet Your Sister." Some of the other many highlights on the album include his playful tribute to rapper Kayne West "Kanye Said" or the abstract, semi-autobiographical "1990-2014." Perhaps the centrepiece of the album however, is the beautifully melancholic "Daily." Far from your typical singer-songwriter piece, his distinctively obscured vocals are coloured by densely layered synth and guitar counter melodies.

So much of Villalta's work is shrouded in mystery. What does all the symbolism, imagery, distorted lyrics and cryptic titles mean? Whilst there is often no literal correlation between the words, images and music, there is a much more instinctual relationship between these seemingly unrelated elements. Villalta is a deeply intuitive artist; his aesthetic is so strong that nothing in his world, no matter how outlandish, seems out of place.

The embryologic references however, are a recurring theme throughout Villalta recorded output beginning with the birth sequence of the first Marka Khan record (a highly under-rated collaboration between Villalta, saxophonist Paris Favilla and drummer Sarah Galdes). Villalta's first solo release was titled Pregdalia and featured a ghoulish pregnant mother on the cover. His subsequent maternal gestation is titled Sir Kep's Mummy Tummy. The use of child bearing as a metaphor for artistic creation highlights the parallels between our instinctual urge to create and to procreate. Villalta's cathartic outpouring of musical expression is the product of an artist compelled to create solely for the intrinsic satisfaction derived from the act itself.

Villalta's second 9-month labour of love has now been released into the world to take on a life of its own for anyone who is willing to engage with it. Rarely is such uncompromising adventurous music so successful and accessible.

Leaving Your Body (Goodbye Now); Click On The URL; Let's Watch That Film, You Deserve It; Marvin Town; Up and Out; Daily; Sir. TMTOIYIOXOIYIOTMT's Elephant; Diana, Deliver This Baby!; People Going; Kanye Said; Stars And Things; Can I Meet Your Sister?; 1990-2014; Lucky; Wise One; Here's'ereH MyM HousesuoH.

All sounds by Marcos Eduardo Villalta