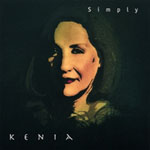 Long-term fans of Brazilian music will recognize the personnel on this CD as some of its very best practitioners, but any newcomer can hear how good they are. Born in Rio and living in the U.S. since 1980, the singer Kenia has released four previous CDs that, like this one, feature an eclectic mixture of tunes which are polished to a high gleam. Kenia's voice has been compared to Astrud Gilberto's, but while they do share a certain sweet breathiness, Kenia is by far the stronger singer.

Simply Kenia is a terrific collection of Brazilian music, pop, and jazz. Highlights include a beautiful "Angel Eyes," graced by Romero Lubambo's guitar; Djavan's "Being Cool," with Lorraine Feather's wry lyrics; "Lamentos," a classic choro composed by the much-beloved Pixinguinha; and the luscious "Open Invitation," which was written by two of the New York Voices and first introduced on their 1993 album for GRP, What's Inside. There are also multi-lingual takes on Willie Nelson's "Crazy," as Kenia takes the famous tune that defined Patsy Cline and turns it into three sensuous sambas in English, Spanish, and Portuguese. There's even a bit of rap on "Deixa Dilson Vamos Nelson," where Jorjao da Silva demonstrates the unique, singsong beauty of the Brazilian language. Each track is expertly arranged by legendary keyboardist/composer Cesar Camargo Mariano, who was married to the equally legendary Elis Regina but stands on his own as a first-call musician.

All told, Simply Kenia demonstrates why, fifty years after the debut of bossa nova, such tropical sounds remain an integral part of popular music. It's a warm and welcoming CD, full of melody, heart, and the uniquely sensuous rhythms of Brazil.