By JEFF DAYTON-JOHNSON
March 26, 2012
Sign in to view read count 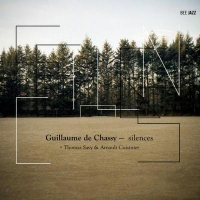 Pianist Guillaume de Chassy insists that Silences is inspired by the example of clarinetist Jimmy Giuffre's late-1950s trio recordings. To be sure, like those records, this album is marked by intimacy and introspection, a strong clarinet sound and no drummer. But Silences, recorded at a French abbey, doesn't sound much like Giuffre's records—nor indeed, like much of jazz, at first blush.

It's not at first clear just what this piano-clarinet-bass formation is up to. The helpfully titled "Birth of a Trio" provides clues. It shows just how much this music shares with jazz—improvisation, first of all; and empathy, the musicians listening closely to each other, as for example when de Chassy's piano sidles up to Thomas Savy's soaring clarinet. "Trio" also demonstrates what's classical about the record: its language and grammar. Savy's clarinet is pure Mozart, clean and free of vibrato or the blues.

Most tracks here adapt classical compositions. The record begins, for example, with an aggressive and mechanical sounding piano-bass pulse in the opening of "Du côté de chez Poulenc (Part I)," in striking contrast to the lovely Poulenc melody "Les chemins de l'amour," played by Savy. In a second take (Part II), the melody is played sensitively by each of the trio members in turn, with arco bass by Arnault Cuisiner and bass clarinet by Savy.

The inclusion of two Shostakovich piano preludes, meanwhile, might recall pianist Keith Jarrett's tackling of the same material on Shostakovich: 24 Preludes & Fugues op. 87 (ECM, 1992). Jarrett played those numbers straight. De Chassy's trio does something more than that, and more than merely transcribing solo piano numbers for different instrumentation. And yet, the musicians don't go as far as keyboardist Uri Caine has done on his series of records, his big jazz group rather rambunctiously playing symphonic numbers as though they wished they were really a symphony orchestra, as on the fine Gustav Mahler in Toblach (Winter & Winter, 1999). De Chassy is freer than Jarrett, but substantially more restrained than Caine in his approach to the classical repertoire.

The musical atmosphere of Silences may not be surprising, coming as it does from a classically trained pianist. On the other hand, de Chassy has spent the better part of the last decade in a rigorous and systematic exploration of the sources of beauty in popular song, whether Rodgers and Hart, Pink Floyd or French wartime chansons. The only explicit acknowledgement here of the lessons learned during that quest for beauty is the lush reading of the theme song to Raymond Bernard's 1945 film Adieu Chérie.

And it's just enough: "Adieu Chérie" echoes faintly in the vaguely jazz harmony de Chassy deploys underneath Savy's thoroughly classical clarinet toward the close of "Silences (Part II)," and at other moments as well.

A departure in many ways, Silences is nevertheless of a piece with de Chassy's earlier work: it's disciplined, restrained, beautiful—and, in its subtle way, hugely inventive.