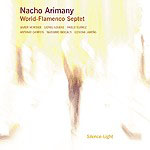 The mysterious and beautiful art-form of Spanish Flamenco music is re-interpreted in composer/percussionist Nacho Arimany's, Silence-Light, a unique listening experience that features the Madrilenian and his World-Flamenco Septet. The genre has been covered before within various idioms, and while the sounds are familiar (precision handclapping and foot-stamping) there is more than what is heard as Arimany states that "The music isn't an esthetic end, but rather a channel to generate movement or communication."

The music indulges many sounds and influences including spirituality, folk, dance, and poetic forms that smoothly flow between each other. This is most evident on larger pieces like the commencement call of "Origen" which contains the sounds of percussion, running/splashing water, woodwind instruments, and chant-like voice, all moving into different compositional sections. Recorded live, the recording feels episodic with sections described by instrumental, dance, or vocal movements similar to a live theatrical work.

Each member of the septet provides excellent performances. Arimany's passion is heard in his playing, painting each piece with ethnic drum-set (which includes exotic percussion) as well as guitar and voice. Discriminating lines are also drawn by Loueke's acoustic or synthesized guitar and West African vocals on "3 Angels" mixed with Arimany's percussion to create a peculiar new world sound.

Along with Arimany, the intricate workings of Biocalti's bass and Suarez's piano provide more than just a jazz trio foundation but also acts as a conduit between the various changes. Saxophonist Javier Vercher makes his presence felt by adding contour texture and mood in depending upon the mood—sometimes primitive ("Below The Sea Level") or jazz-oriented ("Soleá Del Viento"). The spirits of dance and song are always present and Concha Jareno's footwork is an added percussion instrument on "Meeting Point," while Antonio Campos' remarkable vocals are playful and romantic or haunting on "One Old Song."

As the recording began, it ends in mystery and expectation with "Kyrie-Luz," as Arimany plays an affecting solo piano. Jazz and flamenco may have crossed paths before but Nacho Arimany brings a fresh approach with ideas that have yet to be discovered.