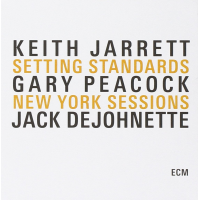 It's hard to believe that Keith Jarrett's "standards" trio, with bassist Gary Peacock and drummer Jack DeJohnette, has been around for a quarter of a century. It's not just the pianist's longest lasting ensemble, but one of most permanent line-ups in jazz history.

To celebrate the occasion, ECM Records has released Setting Standards: New York Sessions, a three-CD set which brings together the entire output of the trio's first session, a remarkably fruitful one that resulted in not one, not two, but three releases— Standards, Vol. 1 (ECM, 1985), Standards, Vol. 2 (ECM, 1985) and Changes (ECM, 1984). The box set also includes a new essay, "The Art of Metamorphosis," by Peter RÃ¼edi, and previously unpublished photos—past and present.

When the trio convened at New York's Power Station studio in January, 1983, they had actually intersected once before, on Peacock's classic Tales Of Another (ECM, 1977). But while Peacock's session was a set of all-original compositions by the bassist, Jarrett's consisted largely of standards culled from the Great American Songbook. It's unlikely that they could have predicted that not only would they still be making music together twenty-five years later, but that they'd still be making vital music largely based on a standards repertoire, with My Foolish Heart (ECM, 2007) being one of the finest live sets the trio has released, nearly on par with its touchstone live album, Still Live (ECM, 1988).

It's important, when reassessing this music, to consider the musical climate at the time. By 1983, an emerging backlash against the more experimental nature of 1960s and 1970s jazz was creating a new neo-conservatism, bolstered by emerging "young lions" including Wynton Marsalis. It might even be possible to consider Jarrett's move away from more overtly experimental works like the all-organ Invocations/The Moth And The Flame (ECM, 1981) and classically informed The Celestial Hawk (ECM, 1980) to be intentionally aimed at capturing some of the audience buying into a growing revisionist and reductionist jazz view, but that would be a mistake.

That Jarrett was giving up on formal writing was monumental enough to some, especially considering the consistently strong songbook he"d built with both his American and European Quartets of the 1970s—especially the latter, which was responsible for classic albums like the compositionally rich Belonging (ECM, 1974). But while Jarrett, Peacock and DeJohnette chose to tackle a repertoire of largely familiar material, from the very beginning their approach to it was anything but conventional, a key defining point that continues to this day.

Yes, this is a trio that can swing with the best of them, and approaches the material with no short supply instrumental prowess. But the same stream-of-consciousness freedom and attention to space that has imbued solo piano performances like the best-selling The Koln Concert (ECM, 1975) can be heard in Jarrett's trio, and its approach to well-heeled songs like the curiously light-yet-fiery "All The Things You Are." Sure, there's a defining set of changes, but when one considers the profoundly lyrical "Meaning Of The Blues"—controversial in itself as the opener to Standards, Vol. 1 by conveying the power of the trio through understatement and subtlety—and the more propulsive but no less thematically attentive "So Tender," which opens Standards, Vol. 2, it becomes clear that this is not a trio simply running down the changes.

In fact, while there are those who see structure as an inherently limiting construct, Jarrett's trio clearly views it as liberating. Rather than defining precisely how a song should be played, form provides nothing more than a common meeting place for the trio's conversation-like interplay. But unlike many free players who use it as a starting point that is quickly abandoned, this trio never loses sight of a song's framework. Freedom need not imply the abandonment of pulse, melody or harmony, a concept made abundantly clear in the climactic closer to Vol. 1, a fifteen-minute, gospel-tinged version of "God Bless The Child" that grooves hard, but provides not just ample delineated solo space for everyone, but the kind of infectious group interaction that set the bar high for this group from the get-go.

Jarrett's ability to create melodically centered layers of dense harmonies is, in many ways, most remarkable because of the very presence of compositional structure. His ability to pull music out of the ether may be considered best-served by his solo performances, but it's no less vivid here, where he doesn't so much reharmonize the tunes as reinvent them, while still remaining faithful to their core. The darkly ethereal "Never Let Me Go," with DeJohnette's spare brushwork and Peacock's responsive anchor and lithe yet focused solo, is a highlight of the set, if only because it demonstrates just how far a song can be taken while still remaining true to its essence.

The trio may be best-known for its interpretation of standards, but throughout its history together there have been plenty of examples of completely free improvisation. Many albums have long, vamp-based sections that act as intros, extros or standalone pieces, like the lengthy "For Miles," from Bye Bye Blackbird (ECM, 1993), but the trio's penchant for free exchange is a precedent that was also set from the very beginning.

The two-part "Flying" of Changes may be attributed compositionally to Jarrett; but it is effectively a thirty-minute free improvisation, ranging from Peacock's pedal tone during the first half of the ruminative "Flying Part 1" to the more swinging "Part 2," where the bassist's unshakable walk not only provides a mooring for Jarrett's unfettered free play, but for DeJohnette as well, who provides a strong but undeniably loose pulse before heading into his most vibrant solo of the entire Setting Standards session. The balladic "Prism"—which closes out both Changes and Setting Standards—is the only example of a preconceived composition from Jarrett, and makes it more the pity that, in subsequent years, he's largely abandoned putting pen to paper.

That Jarrett no longer engages in formal composition has been a subject of some criticism and controversy, as has the longevity of this trio, which has become Jarrett's most commercially successful group. There are those who would like to see Jarrett—who now divides his time between trio and solo performances and recordings—return to writing and, perhaps, form a new group with a different line-up. But then a record like My Foolish Heart is released, proving that the trio still has plenty more to say.

For some, the Great American Songbook has been tapped out; but for Jarrett, Peacock and DeJohnette, it's still a wellspring of inspiration and a source of spontaneous composition of the most collective kind. The release of Setting Standards and My Foolish Heart within months of each other makes clear that, a quarter century since inception, this trio and its paradoxically specific yet wide-reaching concept has by no means overstayed its welcome.

CD1 (Standards, Vol. 1): Meaning Of The Blues; All The Things You Are; It Never Entered My Mind; The Masquerade Is Over; God Bless the Child. CD2 ( Standards, Vol. 2): So Tender; Moon And Sand; In Love In Vain; Never Let Me Go; If I Should Lose You; I Fall In Love Too Easily. CD3 (Changes): Flying Part 1; Flying Part 2; Prism.